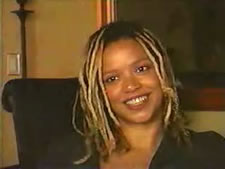 ZORA NEALE HURSTON, the celebrated novelist rescued from obscurity by Alice Walker, was also a noted anthropologist in the early part of the 20th century. She shot footage of field workers in the South in the 1920s, thereby becoming one of hundreds of African-American women filmmakers who would quietly go about their business with little funding or recognition in the last hundred years.

In her documentary Sisters in Cinema, Yvonne Welbon turns up a bit of Hurston’s footage like just one of many precious stones embedded in a muddy path, hidden until pried up and rinsed off. The film follows Welbon’s attempt to find out just what Black women filmmakers have been doing all these years, since she herself was only aware of one other Black female filmmaker (Julie Dash, director of Daughters of the Dust.) The result is a piece of not only narrative interest, but also historical importance.

Welbon’s survey turns up hundreds of filmmakers, most of whom are not commonly known today, or not known as directors. Each revelation of another director is a sugary treat. When she sits in front of her own camera, describing how she found the Hurston footage and asking us if we’d like to see it, our response is a yelping, celebratory “You’re damn right we do! Bring it on!”

But Welbon doesn’t stop in the past. She goes on to explore contemporary filmmakers’ attempt to make their own movies, their own way. When Weldon gets around to analyzing the dearth of Black female directors in Hollywood films, there’s a depressing consistency to the lack of access, lack of funds, and lack of interest reported by the filmmakers. However, Welbon shows us that there’s also a stubborn cadre of Black women making film in the independent circuit and/or turning to television as an alternative venue. But the best part about it all is simply listening to these women speak for themselves, describe their purpose and their work, and give us just a glimpse of what the world could look like if Project Greenlight actually had non-white, non-male judges.