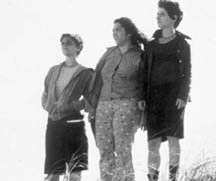 IF ERASERHEAD and Women on the Verge of a Nervous Breakdown had a baby, it could easily take the form of this film by Argentinean director Diego Lerman. This black-and-white road trip goes from creepy to comic to cathartic.

Marcia embodies the worker bee of the modern world, moving from work to home and back again. Among her minor distractions are TV and desperate phone calls to her ex that leave her speechless. Enter Mao and Lenin, aptly named characters who violently revolutionize Marcia, tearing her away from her bourgeois drudgery. But like most revolutions, it’s not without its casualties. Thankfully, the audience is not among them. 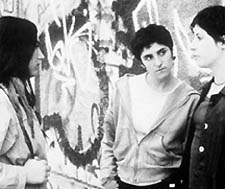 There’s a texture and taste to Suddenly that’s not immediately apparent. By the end, however, viewers will likely feel they’ve digested something solid and healthy, perhaps a little exotic. That initial lack of appetite, a fear during the first few minutes that Suddenly is too unconventional to be entertaining, gives way to hunger.

Lerman’s choice of black-and-white film seems to exaggerate the movie’s amusingly absurd and tragically painful moments. Even the sea is somehow more vibrant under Lerman’s technique. All the leads give poetic performances. And from small beginnings, the story transforms itself into a lens on the human condition.