IT’S NO SURPRISE that over the years AIDS movies, as all “genre” movies do, have developed their own set of themes and clichÃ©s: the dying gay man who throws one last party; warm yet steely mother fighting for her offspring; the family split between acceptance and rejection. What is surprising is a film that can take those well-worn clichÃ©s and re-weave them into a fascinating, moving and ultimately rewarding narrative. 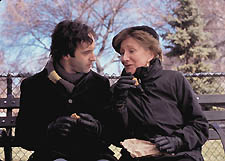 The Event opens with a deceased Matt Shapiro being removed from his fairly fabulous Chelsea apartment, where he has apparently committed suicide to end his intense suffering from AIDS. Small clues lead the district attorney’s office to believe a crime — assisted suicide — has taken place, and dispatches Nicole Devivo (Parker Posey) to investigate. Devivo, who has not-hard-to-determine motives of her own, pieces together the story through flashbacks of the major figures of Matt’s life, in particular his quiet, demure, yet eminently forceful mother (Olympia Dukakis). 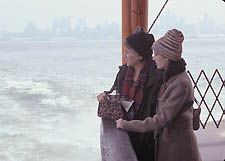 With a number of high-level cast members the acting quality generally soars above even the more maudlin moments, although Posey seems a bit out of sorts in a straightforward, straight-laced role. Dukakis, however, delivers a knock-out as a mother willing to do whatever it takes to ease her son’s suffering: “Sometimes the only way to protect a defenseless child is to let him go back to god,” she says. Her closing lines are a gut-wrenching testament to a mother’s love — and grief.