IN HIS DIRECTORIAL and screenwriting debut, Peter Paige (Emmett from Showtime’s recently departed Queer as Folk) tackles both the disturbing and the provocative. It’s rare that gay films wrestle with such weighty issues as the connections between gay men and pedophilia. Rarer still that the result is so compelling. 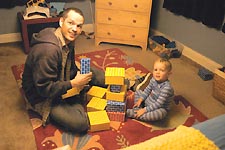 Paige plays Paul, a lovable, goofy Peter Pan type. Bored to tears with his life as a telemarketer, his only refuge is his adorable toddler godson. But Paul’s world is blown apart when the child and parents relocate to Japan.

Overcome with grief, Paul is virtually undone. He takes solace in visiting children’s playgrounds and cavorting with the kids though they’re not his own. He quits his telemarketing gig, takes a job at a kids’ toy store and even tries to find work as a babysitter.

Despite Paul’s best intentions (he would never touch a hair on those kids), the adults around him are increasingly alarmed by his suspicious behavior. Maddeningly, he ignores the pleas of those around him, including his boyfriend.

”It’s a little Lolita, don’t you think?” his boyfriend asks.

”Nothing. It’s just that people might get the wrong idea, that’s all. People are weird when it comes to their kids.”

His fiercest critic, Maggie (played by Kathy Najimy), a repressed housewife in a boring marriage, launches a personal crusade against Paul. A mob mentality ensues, and Paul and is literally chased down the streets by an angry horde.

Seemingly incapable of understanding the outrage, Paul is a befuddling character: a decent, honest sillyheart, but frustratingly naïve and irresponsible. Some of his choices (inviting a kid into his apartment to play) just seem downright idiotic.

While Say Uncle occasionally borders on the preachy and the ending tends toward the maudlin, the overall effect is satisfying. If Paige’s aim is to bust the revolting stereotypes that continue to haunt the gay community, then Say Uncle serves its purpose. While much of gay film today hopes only to titillate or make us laugh, those that make us squirm and question are a welcome addition indeed.