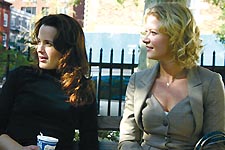 BY CHOOSING TO close Reel Affirmations with Puccini for Beginners, organizers have guaranteed a happy ending. This is sure to be a feel-good crowd pleaser.

Reminiscent of a romantic comedy from Nora Ephron or Woody Allen’s lighter fare, writer and director Maria Maggenti has crafted a visually pleasant story that has an automatic ”chick flick” appeal for straight women and gay men. With the sympathetic lesbian protagonist, Allegra, the target demographic expands widely — especially for the gay film fest circuit. But that’s not to say that Puccini should get star billing at GLBT screenings alone. Maggenti has followed formula skillfully enough that one can hope her movie will find broad, mainstream success.

That may mark the difference between Puccini for Beginners and Maggenti’s sublime 1995 movie, The Incredibly True Adventure of Two Girls in Love. But that’s the price to pay for honing her talents: She’s learned how to please more of the people more of the time. As such, the audiences won’t feel quite as intimate a bond as with Two Girls, but there should be far greater audiences to satisfy with Puccini. 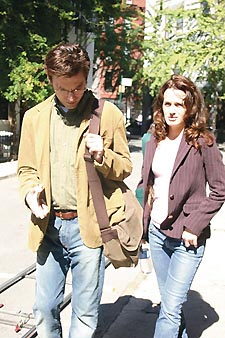 Allegra is a New York lesbian in love with love. As seems common with the hopelessly romantic, Allegra’s sense of love is childish. Maggenti lets us share her entertaining maturation. Moving through the acts of her story involves a few friends, supporting characters into whom Maggenti has breathed some life, rather than throw them in as accessories. More important to plot, however, are Philip and Grace. Justin Kirk’s Philip is bookishly adorable, and adores Allegra. So does his girlfriend, Grace, given a buoyant juiciness by Gretchen Mol.

Of greater import than any of these characters — save for Allegra — are the coincidences. Granted, wacky coincidences are the lifeblood of romantic comedies, but they do come on a little heavy. That is, seemingly, part of Maggenti’s notion in creating situations for Allegra, played with an urban earnestness that’s all pants and charming intellect by Elizabeth Reaser. Paths cross and conflicts arise because Allegra does not tend to her life, choosing instead to let the chips fall where they may — but the chips keep landing right on top of each other. At times, it truly seems that Maggenti and Allegra’s Manhattan is peopled by about a dozen New Yorkers.

Puccini for Beginners may not be a gut-buster, but it is as likeable as its attractive characters. And though your sides won’t ache, you will laugh, as Maggenti continues her true adventure of making intelligent fare with heart. — WOB