Home / Features / From the Top

And while Chi Chi turned 49 last fall and lost his 90-year-old mother in December, there is plenty of good news. Following gastric-bypass surgery, Chi Chi has shed nearly 100 pounds, which has turned her attention to a bevy of new fashion options. She also recently released a new public-service announcement on SafeSexIsHotSex.com, looking as fierce as ever. 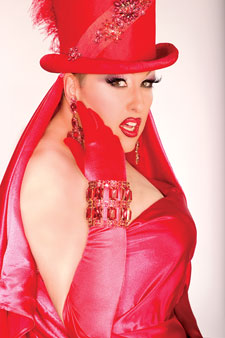 CHI CHI LaRUE: Better than we expected. It’s beautiful, if I do say so myself. It adds so much gayness and sparkle to the boulevard — something that was missing. It’s very pink and very bright, very inviting. And people come in there and buy DVDs and lube and… room aroma. They’ll spend money on sex items.

MW: How is the industry evolving? VCRs killed adult theaters, and now the Internet seems to be taking a big hit on DVDs.

MW: But you have a big presence of your own online.

LaRUE: And it’s going to be bigger. We’re slowly going toward video-on-demand (VOD). I guess I’m so old-school, though, that it saddens me a little bit. I like tangible, hard products. I like a DVD. I like the box cover. I like to look at the pictures.

As soon as they make it comfortable for people to sit in bed and order their favorite movies, then I think we’re dead in the water as far as the DVD goes.

MW: In your work as a director, do you have a preference when it comes to shooting straight or gay movies?

LaRUE: Obviously, my preference is for gay. I don’t shoot straight porn anymore, because they stopped letting me use condoms. But I loved doing the straight stuff. It was fun to see how far I could push it, and push the guys — like letting the girls lick their asses — just making it as dirty and as Chi Chi LaRue as I could. And I loved directing the girl-girl movies because they were fun. I could dress the girls up. They loved that I was doting over the shoes and jewelry and making sure the makeup was perfect and that they looked beautiful in the light.

MW: Speaking of condoms, you’ve been downright outspoken about them.

LaRUE: It’s like if I owned a steel mill and I hired welders and said, ”It pays this much money. It’s got great benefits. But at this job we don’t use gloves or goggles. Now get in there and start welding.”

I have to protect the people who work for me. I wouldn’t feel right about myself otherwise. I do believe in freedom of speech, freedom of expression. But I would really hate to be the company in Britain who had those young boys on their set who did barebacking and one of them became HIV-positive because of it. Ech! No way. Ugh. I couldn’t handle that.

LaRUE: ”Raw” does not mean without a condom. It means it’s amateur. It’s raw. It’s raw talent, new guys. It’s raw sex, but they have condoms on. You can have raw, animalistic, stinky, sweaty, filthy sex, and there can be a condom involved.

MW: I’ve interviewed a few guys over the years who’ve worked with you. They all revere you as a sort of de facto life coach.

LaRUE: That’s part of it. You have to be a therapist. You have to be a mother, a father. And that’s okay. I’ve taken on that role and I own and embrace everything that I’ve put out there. It’s been successful for me. I love the fact that people want to work for me because they know they’re going to be taken care of.

They know [when] they come on a set with me there are going to be no surprises. I won’t spring something on them at the last minute. I won’t bring some kid in who’s new and say, ”Well, I know I said that you were going to top, but I really need you to be a bottom and get pissed on.” I’m not going to do that to them. That would not be nice.

MW: From small-town Minnesota to L.A. — via Minneapolis — was the industry what you expected when you arrived in the 1980s?

LaRUE: It was exactly what I thought it would be. It was very exciting the first time I walked onto a set. The first thing I ever saw was a girl-girl sex scene. It was completely embarrassing for me. I was the boom person and I had to turn away because I’d never been so close to two writhing vaginas in my life. Without realizing, I had lowered the microphone into the shot. It was very strange.

I wanted to move to L.A. because I thought I was going to be a movie star — I thought I would be famous. I was working at an adult bookstore before I left Minneapolis. I saw an ad to work at Catalina in sales. I went in and nailed the interview because I knew everything about their product — everything. I knew the stars, the titles. I knew movies that hadn’t even come out yet.

Working at Catalina, I would constantly go into the editing room or the art department. I was constantly looking at everything. I got to work with William Higgins.

When people say ”full circle,” it really is. I started 21 years ago at Catalina and now I own Catalina.

LaRUE: A lot. And I don’t need to win any more. I want the people who work on my movies, the boys who work in my movies, to win awards. I’m nothing without my crew and cast. I’m just the lucky one who has the name and gets all the glory for these great productions that a really great team of people put together. I’ve got this team and these boys and they all give 110 percent. That’s the only way a movie can be successful.

MW: Is there an award that means more to you than the others?

LaRUE: There is one that stands out: my nephew’s. He won for best music last year. He did the music for my Link: The Evolution. He’s my straight nephew who lives in Minneapolis. He’s a DJ and a remixer, 30 years old. He’s just this super-cool, awesome kid. He did this music for me and I brought him to San Francisco for the awards and he won. That was so cool!

LaRUE: You have to be hot onscreen. You don’t necessarily have to be versatile, but you have to be in the moment. You have to look like you like it. You really have to emote some personality in the movies. You also have to bring that personality out to the masses. Because nowadays, with the Internet, everybody can take a picture of you when you pick your nose. No matter what you do or where you go, you’re under a microscope and the mystique is out the window.

If you’re not nice and you don’t want to be around your fans, they talk about it on blogs. The information network is going to tell everyone the way you were at XYZ Club on Tuesday night, smashed out of your gourd, and you didn’t want to talk to anybody, and you were doing bumps in the bathroom and here’s a picture of him doing the bump.

I’m really lucky at my company to have a lot of amazing guys under contract who are really, really personable, who want to be around their fans, who like doing these movies and want to give their all.

LaRUE: Do I ever want to throw it away? Yes. Throw Chi Chi away and have a great big bonfire and throw away everything drag? Yeah, I do.

I actually said I was going to stop doing drag at 50. But I’ve got this new body and I look pretty great in drag right now. I’ve been around for 20 years. I’m going to be around a lot longer.