As the legislative window closes, LGBT groups gather behind ENDA -- while keeping a close eye on DADT

As the timeline for action on the Employment Non-Discrimination Act (ENDA) tightens, LGBT organizations turned up the pressure on Tuesday, May 18, with a news conference at the National Press Club in Washington and a rally in front of House Speaker Nancy Pelosi’s office in San Francisco. The events – particularly the San Francisco event – led Pelosi (D-Calif.) to spend an hour Monday, May 17, on a conference call aimed at reassuring LGBT groups that she intends to hold votes on both “Don’t Ask, Don’t Tell” repeal and ENDA this year. 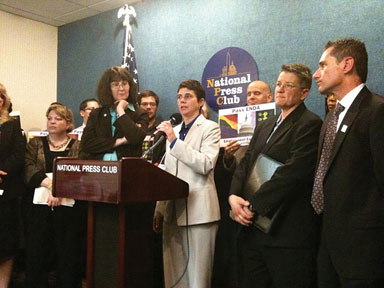 The National Center for Transgender Equality’s (NCTE) Mara Keisling, who was among those invited to participate in the Monday conference call with Pelosi, told Metro Weekly, “She talked to us about her commitment for ENDA and possible ways of getting both ENDA and ‘Don’t Ask, Don’t Tell’ through Congress this year.”

Most congressional observers and LGBT advocates expect movement on DADT repeal to be considered, if formally proposed, as the Senate Armed Services Committee and full House consider the National Defense Authorization Act in coming weeks. But no such path has been made clear for ENDA, even in the House where the bill has a greater chance of success. After Monday’s call with Pelosi, Keisling noted, “ENDA’s still not scheduled, so that’s hard.

That pressure was made clear in San Francisco on Tuesday evening, when several groups – Get Equal, Equality California, the National Center for Lesbian Rights (NCLR), the Transgender Law Center, the Equality Federation and local groups – joined together for an event aimed at showing Pelosi the importance that her constituents placed on her scheduling a vote on ENDA.

It was reiterated the next morning as well, when the Courage Campaign teamed up with Credo Action, AmericaBlog and Open Left to launch a letter-petition campaign on May 19 with the tagline, “Dear Democrats, We need to talk. – The Gays.” The letter uses lighthearted language – “This may be a hard letter to read, but I need to figure out if this relationship is still healthy for me.” – to get at a serious point. “You need to finally give me the Employment Non-Discrimination Act and repeal Don’t Ask Don’t Tell, like you promised.”

Speaking about concerns that House consideration of any DADT repeal in the National Defense Authorization Act in the coming weeks could put off any ENDA vote for the time being, the National Gay and Lesbian Task Force’s Rea Carey said Monday, “We would all be doing a disservice to our community, and frankly to the country, if we accept the either/or framework that has been put up about ENDA and ‘Don’t Ask, Don’t Tell.”

To that end, the NCLR’s Liz Seaton pointedly noted, “As we talk about Congress considering various pieces of legislation, it’s not that the LGBT community wants so much, it’s that Congress has failed to act to end the discrimination in so many areas for so long.”

Whether ENDA is ready for a vote, though, is a matter of some disagreement. Both Harry Gural, Frank’s communications director, and a Democratic leadership aide have strongly disputed the circulating conventional wisdom that the whip count they say is necessary to bring ENDA to the floor for a vote in the House is complete. On May 15, Gural specifically disputed an account published in the LGBT newspaper Bay Windows on May 13 in which the view of “supporters” of ENDA was characterized as “just waiting for the Democratic leadership to call the bill to the floor.”

The characterization was backed in the article by Carey and Keisling. Carey was quoted as saying, “We have heard that the official whip is completed and that there are enough votes to pass ENDA in committee and in the House, which tells us that our vigorous lobbying and grassroots engagement efforts are being effective.”

On Capitol Hill, however, things are not being described i n such conclusive terms. An aide in Frank’s office singled out the Task Force’s assertion about the whip count in a meeting on May 14. Shannon Cuttle, an activist with Get Equal, met with Diego Sanchez, Frank’s aide, on May 14. Cuttle said that Sanchez told her and James Pietrangelo II that Carey’s quote was incorrect.

Gural went further on May 15, telling Metro Weekly that it was “irresponsible” to claim that the whip count is completed. Gural said that the count is being run through Frank’s office, so he and Sanchez would have the most accurate information on where the count stands.

The leadership aide pressed the case for why the whip count on the motion to recommit is important, writing, “Last week, House Republicans offered a motion to recommit on the Home Star bill, which amended the bill with Trojan Horse language that prohibits funding to go towards child molesters.”

The aide also pointed to a report at the Center for American Progress’s Think Progress blog detailing similar action by the Republicans on several pieces of legislation. The aide concluded, “If Republicans are willing to play politics with jobs legislation, can you imagine what they will do with a motion to recommit on ENDA?”

Talking about the whip count on a “hypothetical” motion to recommit, NCTE’s Keisling responded to Gural and the leadership aide’s comments on Saturday. She said that there are going to be some people voting “pro-LGBT” no matter what and some voting against no matter what, but that “everyone else is just rationally going to say, ‘It depends on what it is.’”

At Monday’s news conference in D.C., NGLTF’s Carey added to that, saying, “We have been working on this bill for decades, we have done our work, and we believe we have the votes.”

As to Gural and the leadership’s concern, Carey said, “We know that we and our colleagues in many other organizations will do everything we can on those motions to recommit to make sure that this bill remains as one of the landmark pieces of civil-rights legislation in this country that will protect lesbian, gay, bisexual and transgender people.”

As to the issue of priorities, of which Keisling has been critical of the leadership, she clarified her remarks on Saturday, May 15, saying, “They might be prioritizing it now, but the reason they’re doing it now and not nine months ago is indisputably that they didn’t prioritize it. They prioritized health care — and maybe that was the right thing to do — but that’s what happened.

“I don’t have access to whip counts, and I get it, but what we’re saying is, ‘We can pass the bill,’” she said. “They have their jobs to do, and they want to temper expectations, but we want to see a vote.”

Or, as the Courage Campaign’s petition-letter to the Democrats concludes, “I have enough disappointments in my life. I need you to not be one of them.”