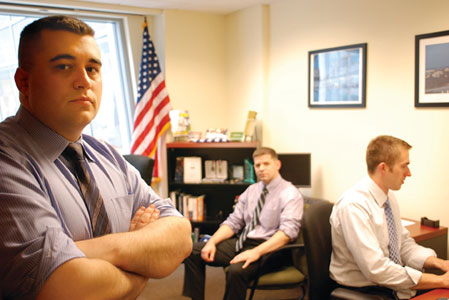 Today, Servicemembers United put out a news release to several hundred people, alerting LGBT and other progressive bloggers and other media to the fact that “DOJ ‘Declines to Appeal’ Right Wing Legal Victory This Week.”

Alex Nicholson, executive director of Servicemembers United, announced in the release, “In the very same week, the administration says that it absolutely must appeal a federal court’s decision on ‘Don’t Ask, Don’t Tell’ while it orders the Justice Department not to appeal a federal court’s ruling in favor of the conservative Alliance Defense Fund. This contradiction is simply incomprehensible and insulting.”

The fact, however, is that the actions in the two cases are neither a contradiction nor insulting. Also, if one slows down long enough to look at the cases, the distinctions are easily comprehensible.

First, and most importantly, the ADF case — Boardley v. Department of the Interior — involved a regulation and not a statute like that involved in Log Cabin Republicans v. United States. That distinction, ultimately, ends any comparison sought by Nicholson between the actions in the cases.

As detailed in the Boardley opinion, the provisions challenged there were regulations issued by the Interior Department that “govern ‘[p]ublic assemblies, meetings,’ 36 C.F.R. § 2.51, and the ‘[s]ale or distribution of printed matter,’ id. § 2.52, within the national parks.” The underlying law — which gives the Secretary of the Interior the authority to issue “such rules and regulations as he may deem necessary or proper for the use and management of the parks” — was not at issue in the case.

In other words, there was no law passed by the Congress that the executive has a constitutional obligation to enforce. There is simply no separation of powers issue in the ADF case. Since a regulation — a creation of the executive — was at issue, the executive is free to alter that regulation at its will. That precisely is what happened in Boardley. After getting smacked down by the U.S. Court of Appeals for the D.C. Circuit for its enforcement of an unconstitutional regulation, the Park Service altered that regulation.

When a law — like 10 U.S.C. 654, the “policy concerning homosexuality in the armed forces,” better known as “Don’t Ask, Don’t Tell” — is challenged, however, the executive’s obligations are different because the legislative branch has spoken on the matter by passing a law. That is the situation at issue in the LCR case.

The second, but far less relevant, distinction: Boardley had a full hearing before an appellate court. The case had been appealed by ADF attorneys to the D.C. Circuit, which unanimously held the regulation was unconstitutional.

There is more in the 29-page Boardley appellate opinion relating to the state of the law in the area and the lack of contradictory rulings from other courts that arguably draws further distinctions between it and the LCR case, but, suffice it to say, Servicemembers United’s news release does not accurately convey the facts, comparisons or distinctions of either case.

Nicholson sent the following statement to Metro Weekly responding to the claims made by this report:

“It is insufficient to keep saying you can’t compare apples and oranges in these cases that demonstrate the administration’s ability to decline to appeal a federal court decision. They may be different, but you certainly can draw instructive and enlightening comparisons between apples and oranges – they’re both round, they’re both organic, and they’re both fruit. The point being made in pointing out the different approaches is that the administration clearly does not have to appeal every case, and it is interesting that they seem more interested in defending Congress’ will than their own. Also, it’s interesting that in the Alliance Defense Fund case the administration is willing to let civil liberties rule the day, but not when it comes to gay issues. It is my duty, obligation, and responsibility to hold the administration’s feet to the fire on ‘Don’t Ask, Don’t Tell,’ and I will not decline to live up to that responsibility because the analogy is not perfect. If we wait for perfection, or for the president, we might wind up with nothing.”

The full SU release is below the jump.

* * *
Administration Tells Justice Department to Appeal DADT Decision,
Simultaneously Says DO NOT APPEAL Right Wing Legal Victory
Claims that Administration “Must Appeal” DADT Ruling Contradicted
FOR IMMEDIATE RELEASE
10/15/2010
Contact:
Jarrod Chlapowski: [REDACTED]
Alex Nicholson: [REDACTED]
WASHINGTON, D.C. – Servicemembers United, the nation’s largest organization of gay and lesbian troops and veterans, issued the following statement today in response to the news, reported in the Washington Post, that the Obama administration has ordered the Justice Department this week not to appeal a ruling in favor of the right-wing Alliance Defense Fund:
“In the very same week, the administration says that it absolutely must appeal a federal court’s decision on ‘Don’t Ask, Don’t Tell’ while it orders the Justice Department not to appeal a federal court’s ruling in favor of the conservative Alliance Defense Fund. This contradiction is simply incomprehensible and insulting,” said Alexander Nicholson, Executive Director of Servicemembers United and the sole named veteran plaintiff in the case along with the Log Cabin Republicans. “Servicemembers United renews its call for the administration to withdraw its appeal of both the ‘Don’t Ask, Don’t Tell’ ruling and the injunction pursuant to that ruling.”
In August, a federal appeals court ruled in favor of the Alliance Defense Fund, a right-wing Christian organization, on First Amendment grounds in a case involving proselytizing in national parks. The case in question is Boardley vs. U.S. Department of the Interior. This week, the Justice Department declined to appeal that ruling.
In September, a federal district court ruled in favor of the Log Cabin Republicans, a conservative gay organization challenging the “Don’t Ask, Don’t Tell” policy, on First and Fifth Amendment grounds. This week, the administration instructed the Justice Department to appeal that ruling while insisting that it had no choice but to appeal.
###