Lame Duck With the Obamas and the McCains

It’s not yet Thanksgiving, but the lame-duck session of Congress that begins today is the Democrats’ best chance for a holiday in the near future. 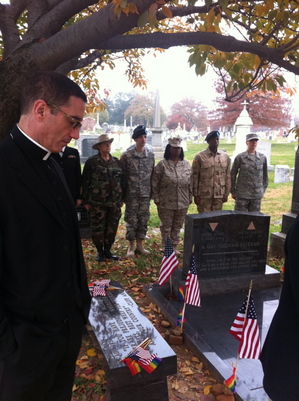 It’s also the last chance for President Obama to make good on his promise to secure repeal of the military’s “Don’t Ask, Don’t Tell” policy this year. Additionally, say most observers, it’s likely the last chance for legislative repeal in the next two years.

Get Equal began the overcast morning with a vigil at the gravesite of Sgt. Leonard Matlovich, a recipient of both the Purple Heart and Bronze Star whose tombstone at the Congressional National Cemetery includes pink triangles; the heading “A Gay Vietnam Veteran”; and the famed inscription, “When I was in the military they gave me a medal for kiling two men — and a discharge for loving one.”

With leaks of the Pentagon working group report looking at the repeal of “Don’t Ask, Don’t Tell” starting to come last week, the momentum for repeal appeared to pick up after rumors about the whether Democrats would drop the DADT repeal from the National Defense Authorization Act had circulated earlier in the week.

Then, the NOH8 project released an “anti-bullying message” video noting, among other things, that government actions “treat[] the LGBT community like second-class citizens.” The messenger was particularly notable, as it came in the form of Cindy McCain.

The wife of the leading DADT repeal opponent in the Senate, Sen. John McCain (R-Ariz.), Cindy McCain minced no words in the video, saying, “Our political and religious leaders tell LGBT youth that they have no future … they can’t serve our country openly.”

Later, she adds, “Our government treats the LGBT community like second-class citizens; why shouldn’t they?”

The comments, so specifically directed at her husband’s effort to stop the repeal of DADT, were striking and inspiring to many who saw the move as a sign of how far out of touch Sen. McCain had become.

Then, on Friday night, Cindy McCain effectively took back the words of the video, writing on Twitter, “I fully support the NOH8 campaign and all it stands for and am proud to be a part of it. But I stand by my husband’s stance on DADT.”

The pullback led to much chatter and questions, but the important part, for those who want DADT repeal, is that Sen. McCain then appeared on Meet the Press on Sunday — still opposing repeal at this time and telling David Gregory, “Once we get this study, we need to have hearings. And we need to examine it. And we need to look at whether it’s the kind of study that we wanted. It isn’t in my view.

“I want a thorough and complete study of the effect on morale and battle effectiveness of the United States military. I will listen, as I’ve said for years, to our military leaders,” he said. “This study was directed at how to implement the repeal — not whether the repeal should take place or not.”

That McCain would do so — seek to further delay repeal by criticizing the study — should not be a surprise. He said so in September, when he spoke with reporters following the failure of the Senate to move forward on debate of the NDAA. From Metro Weekly‘s report on the September Senate vote:

McCain added a new level to his opposition in his statement today, noting when asked about his previous concern about passing legislation prior to the conclusion of the Pentagon’s implementation review, ”I’m also very concerned about this survey itself. This survey itself is how to best implement repeal. What we really need is a survey that says what would be the effect on battle readiness, morale and recruitment.”

Now, McCain is simply doing what he said he’d do. The only question is whether his previously stated position will have any impact on Senate Majority Leader Harry Reid (D-Nev.); Senate Armed Services Committee Chairman Sen. Carl Levin (D-Mich.); Republicans like Sens. Susan Collins (R-Maine), Olympia Snowe (R-Maine) or others; or President Obama as advocates push for lame-duck passage of the NDAA and DADT repeal.

“McCain seems to be saying he wants a do-over because he doesn’t like the findings and recommendations in the Pentagon report going to Secretary Gates,” he said in the statement. “In other words, McCain is telling the Pentagon: Keep working until you produce the outcome I’m looking for.”

What is still not clear, and frustrating to repeal advocates, is whether the White House will be engaging directly with senators whose votes are needed to move the NDAA forward in the lame-duck session.

As the session starts today, however, the clock for repeal is ticking — and the chances for a lame-duck holiday will, without action to counter the perception and reality, get slimmer by the day.

Watch McCain on Meet the Press.

[Photo provided by Get Equal.]

← Previous Story What Happened at the Supreme Court Today, and Why It Matters
Next Story → Choi to White House, OutServe and Knights Out Provide an Out