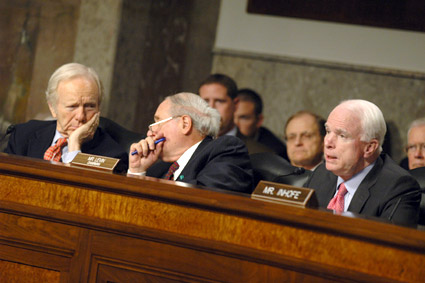 [Photo: Sens. Joseph Lieberman (I-Conn.), Carl Levin (D-Mich.) and John McCain (R-Ariz.) at Friday’s Senate Armed Services Committee hearing regarding “Don’t Ask, Don’t Tell.” A meeting at the White House to discuss the strategy for repeal of the 1993 law was held later in the day on Friday. (Photo by Ward Morrison.)]

Following today’s Senate Armed Services Committee hearing discussing, in part, the lame-duck consideration of “Don’t Ask, Don’t Tell” repeal legislation, the White House held an off-the-record meeting with organizations pushing for DADT repeal regarding repeal and the National Defense Authorization Act to which it is attached.

White House spokesman Shin Inouye confirmed the meeting with Metro Weekly, writing, “Today, the White House met with various stakeholders to discuss the passage of the NDAA, including DADT, during the lame duck.”

Two people who attended the meeting but asked to remain anonymous because of the off-the-record nature of the meeting told Metro Weekly that those organizations that were represented included Center for American Progress, Human Rights Campaign, Log Cabin Republicans, National Black Justice Coalition, National Gay and Lesbian Task Force, OutServe, People for the American Way, Servicemembers Legal Defense Network, Servicemembers United, Stonewall Democrats and Third Way. [Politico‘s Josh Gerstein, who first reported the news, also reported that representatives from OutServe and the Palm Center attended the meeting, a fact confimed to Metro Weekly by a third attendee.] As such, it would make it the largest of several such White House meetings held about DADT repeal this year.

Echoing and expanding on President Barack Obama’s comments made after the report was released on Tuesday, Inouye wrote, “The meeting follows the release of the Defense Department Working Group report and the congressional testimony of 10 top military leaders this week. The testimony from those witnesses makes clear that now, more than ever, Congress can and must take action during the lame duck session to give the military the flexibility it needs to end DADT in a way that does not jeopardize military readiness.”

One of the attendees said that the attendees were told that “this was in fact a priority for the president and that [the New] START [treaty] and DADT [repeal] can both be passed in the lame-duck.

“Early next week, they are going to engage the progressive community in calls for the senators,” the attendee said they were told, referencing the Organizing for America and Democratic National Committee outreach described on Wednesday to Metro Weekly.

A second attendee looked at the Senate action this week, saying, “We had a very, very good series of Senate Armed Services Committee hearings, dominated by a really strong message from the Pentagon that we can repeal ‘Don’t Ask, Don’t Tell’ and we can implement in a timeframe that makes sense.

“While today’s hearing pointed to the fact that the are different opinions [of this issue], at the end of the day, the message was, ‘We can do this.'”

Of the White House’s view after those hearings, that second attendee said, “With all the competing legislative issues and a shrinking calendar, they were very positive about NDAA and DADT repeal, and they are committed to getting it done.”

Regarding the timing, however, the first attendee said that the pending impeachment proceedings for U.S. District Court Judge Thomas Porteous of Louisiana and resolution of the tax-cut issues raised in a letter sent to Reid from and signed by all 42 Republican senators earlier this week “need to be done” before the Senate will proceed. “So we’re looking at the next week,” the first attendee said.

As for that timing, which differs from the timing discussed by SLDN executive director Aubrey Sarvis after the hearing, the second attendee said that discussion about running out of time was slightly overstated at this point.

“Eventually, yes, we’ll run out of time. But we’re not there yet, and we won’t be there if the vote isn’t held next Monday, Tuesday or Wednesday,” the second attendee said. “The important thing is that we win the vote when it’s held because there’s no second chance.

“We want to hold the vote when will be able to win the vote.”

The first attendee said that Tchen stressed the White House’s commitment to passage of repeal language by stating that “if they weren’t serious about this they wouldn’t have put [Defense Secretary] Gates and [Joint Chiefs of Staff chairman Adm. Mike] Mullen out there.”

The second attendee, asked if this appeared to be a meeting to mollify organizations as a prelude to bad news about the repeal legislation, said, “I know it wasn’t. I’ve been mollified before, and this wasn’t mollification.”

The first attendee, however, did say, of the path forward, “All roads keep leading back to [Senate Majority Leader] Harry Reid [(D-Nev.)]. If he chooses to lay out a fair path, the votes should be there. If he chooses to be a jerk about it, the game’s over.”