Now retired, former U.S. District Court Judge Vaughn Walker, who presided of the Perry v. Schwarzenegger trial over the constitutionality of California’s Proposition 8, was asked if he is gay and — now — he’s telling. Reporters, at that. 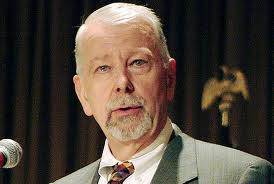 The talk to a handful of reporters was Walker’s first public comments to reporters about presiding over the lawsuit challenging to Proposition 8, which banned gay marriage in California. Walker struck down the ban as unconstitutional, and the case is currently on appeal.

It was also the first time Walker publicly acknowledged his own sexual orientation. Walker said he has been in a relationship with the man for 10 years. “He is a physician,” Walker said.

The San Francisco Chronicle had reported on the “biggest open secret in the landmark trial” way back in Feb 2010, following the close of the presentation of evidence at the Perry trial. As Metro Weekly reported in an article that detailed the many people to have heard rumors about but not reported on Walker’s sexual orientation prior to the Chronicle column’s publication:

Michael Triplett, a board member of the National Lesbian & Gay Journalists Association, said in an interview on Thursday that The Reporter‘s weighing of the news value versus the privacy of the judge was the usual balancing that goes on with most mainstream media – and even some more established LGBT media – when considering whether to publish such information.

Walker found Proposition 8 to be unconstitutional on Aug. 4, 2010.

Walker also told the reporters today that he never thought about giving up the case because of his sexual orientation:

Former U.S. District Judge Vaughn Walker, who retired from the bench at the end of February, said it would not be appropriate for any judge’s sexual orientation, ethnicity, national origin or gender to stop them from presiding over a case.

The National Organization for Marriage and some others had called for Walker’s recusal.

On Thursday, April 7, the Senate Judiciary Committee is set to consider the nomination of J. Paul Oetken for a judicial nomination in the Southern District of New York. Oetken would be the first out gay male federal judge to serve, if confirmed by the Senate.