By John Riley on September 22, 2011 @JohnAndresRiley

Lt. Dan Choi’s chief legal counsel, Robert J. Feldman, filed a response on Sept. 21 to the government’s filing of a motion seeking to order Magistrate Judge John Facciola to refrain from allowing Choi’s lawyers to use “selective or vindictive prosecution” as a defense to the charge of failure to obey a lawful order by a police officer.

The government filed its writ on Sept. 12, as previously reported by Metro Weekly. Choi’s trial was temporarily halted on Aug. 31 after Facciola announced he had found prima facie evidence of vindictive prosecution on the part of the U.S. government that would allow Choi’s lawyers to argue that as a defense. The ruling also would have given Choi’s lawyers access to additional records and information detailing how the government prosecuted Choi and his fellow protestors. 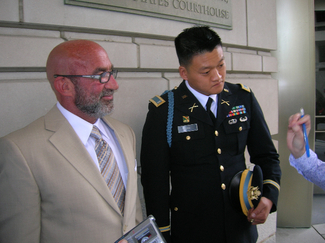 In the filing, Feldman argues that there are no grounds for relief and that the elements for filing a writ of mandamus have not been met. Feldman’s response states that the government could have appealed instead of issuing the writ, and is not irreparably harmed by Facciola’s prima facie finding because the government had opportunities — both before and during the trial — to develop a case that would rebut any selective or vindictive prosecution defense put forth by Choi’s legal team.

Feldman writes that witness testimony from the trial shows evidence of selective or vindictive prosecution by the government in response to Choi’s criticism of President Obama and his act of civil disobedience on Nov. 15, 2010, when he was arrested with 12 others after members of the group handcuffed themselves to the White House fence during a protest against the military’s “Don’t Ask, Don’t Tell” policy banning lesbian, gay and bisexual servicemembers from serving openly.

Finally, Feldman argues that the government’s behavior throughout the case prevents it from seeking mandamus.  Mandamus is intended to “remedy a wrong,” he writes, and the government’s action leaves it with “dirty hands” that should lead to the rejection of the mandamus request.

Among the reasons, Feldman argues, are that the government “persecut[ed]” Choi “for exercising his right to go to trial” by initially tying his decision to go to trial to the fate of the other 12 protesters arrested with him. The government, he writes, conditioned its plea deal — later taken by the other 12 — on acceptance of the deal by all 13 defendants. When Choi refused, the government eventually relented and allowed the plea deal to go forward with the 12, while allowing Choi to continue to trial.

In addition, Feldman argues that the government neglected to prepare adequately for the case, pointing to disclosure of material to the defense just days before trial, and that the government withheld material that it had a duty to disclose that could have aided Choi’s defense strategy, pointing to the Park Service emails that were disclosed at trial that discussed possible federal charges related to the protests.

“We will permit the government a reasonable time to reply if they wish,” Feldman said in an interview with Metro Weekly. The government, under court rules, has the right to file a reply.

Read the filing by Choi’s lawyer: Choi Response to Mandamus.pdf