More than 30 local activists representing a coalition of LGBT organizations protested in front of Metropolitan Police Department headquarters and the U.S. Attorney’s Office for the District of Columbia today to demand fair treatment of transgender individuals by police and increased efforts in solving and prosecuting crimes committed against transgender people.

The protest, the Transgender Day of Action, was organized to call attention what activists call an inadequate response to violence directed against members of the LGBT community. It also served as a preview of the Transgender Day of Remembrance, Sunday, Nov. 20, which memorializes people killed due to anti-transgender bias. Washington’s memorial vigil will be held at Metropolitan Community Church, 474 Ridge St. NW, Sunday at 5 p.m. 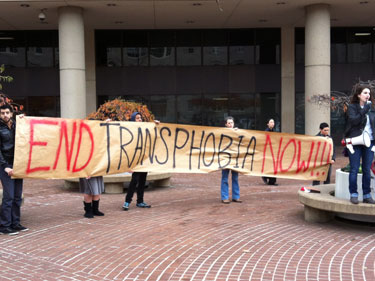 Transgender Day of Action protesters in front of U.S. Attorney’s Office for D.C.

Event organizers also issued a list of demands and goals, which they submitted to the offices of MPD Chief Cathy Lanier, U.S. Attorney for Washington, D.C., Ronald Machen, and the 13 members of the City Council.

The list includes requiring LGBT sensitivity training for all MPD officers; closing what activists call a disparity gap between the clearance, or closure, rate of crimes against the transgender community and crimes overall; harsher disciplinary standards for officers failing to uphold the D.C. Human Rights Law; and better tracking and reporting procedures of cases involving transgender people, including referring to them by their preferred name and presenting gender.

The activists also called for the elimination of ”prostitution free zones,” which they believe to be unconstitutional and say encourages police to engage in discriminatory profiling. A recently introduced City Council bill, submitted by Councilmember Yvette Alexander (D-Ward 7), would make such zones permanent.

In response, Lanier offered a statement, handed to protesters by MPD personnel, in which she reiterated both the MPD’s commitment, as well as her own, to protecting ”all members of our communities” and highlighting the department’s outreach to the LGBT community.

”An example of our efforts to improve our outreach is that we scheduled a series of open houses – the first being last night to introduce our GLLU affiliates to the community,” Lanier said in a statement. ”While 15 affiliate members were in attendance, no members of the GLBT community showed up. This has to be a partnership where efforts are made on both sides.”

The department has seven other open houses scheduled for November and December, one for each police district. Although none of the remaining MPD outreach events are specifically geared toward the LGBT community, the Gay and Lesbian Liaison Unit (GLLU) participates as a component of the Special Liaison Units (SLU) division, as was the case in the Nov. 16 open house cited by Lanier.

But the activists in attendance pushed back against Lanier’s statement, which many viewed as a thinly veiled swipe to try and discredit them.

”We’ve had those kinds of open houses and those meetings, and nothing comes of it,” said Janelle Mungo, a member of Get Equal DC and one of the organizers of the demonstration. ”They’re not highly publicized. It’s hard to know when they’re going on. When they are publicized and we do know of it, we send folks. Nothing comes out of it. It’s the same story over and over.”

Lanier’s statement also prompted a rebuttal from Get Equal’s Charles Butler: ”We had 30 people show up at our event. You had none. Next time, if you contact us, we’ll help you with your P.R.”

John Riley is the local news reporter for Metro Weekly. He can be reached at jriley@metroweekly.com
← Previous Story Court Rejects LCR Rehearing
Next Story → Phantom Makes Fixes to Filters