With ''Little Murders,'' TACT delivers on Feiffer's clever and amusing fantasy of an urban middle-class meltdown

A small company with an intrepid spirit, The American Century Theater taps another piquant time and mood in America’s 20th century with Jules Feiffer’s Little Murders. One of Feiffer’s few plays – he was best known for his clever and provocative cartoons – Murders is Feiffer’s satirical state-of-play for a late 1960s America. Set in a New York City decades removed from today’s family friendly tourist destination, this was New York when drugs, guns, and general mayhem were on the rise in daily life, with no end in sight. Add to this the recent assassination of President Kennedy, and people were disillusioned and worried for America’s future. Into this pressure-cooker of fears and uncertainties, Feiffer puts the Newquist family: two parents and their two grown children sharing their dingy apartment in functional dysfunction. When daughter Patsy brings home yet another in a long line of ill-matched suitors, tensions rise until the city itself encroaches and the private family dysfunction turns public.

Despite this less than subtle dig into the American gut, Feiffer’s take is far too satiric – and at times ambiguous – to become preachy or maudlin. Put another way, he is holding up a less than flattering mirror, but he is also having fun. And he wants us to have fun too. Even if a few of the mores (not to mention the hairstyles) are now out of date, with so much current commentary veering between empty sass and big-eyed sentimentality, Feiffer’s intelligent irreverence is pleasingly grumpy, feisty and fresh. 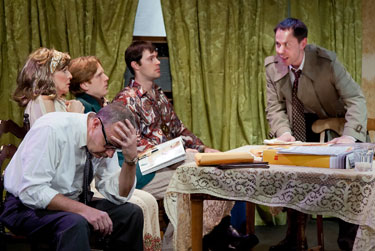 Always restrained, TACT never gilds the vintage lily and this production is no exception. Capturing the vibe of a high-rise apartment, the anarchic sounds of the city and certain of the music of the day, simply but effectively, set and sound designers Patrick Lord and Ed Moser deliver palpable atmosphere. Anyone on the Gen X cusp or older will feel a nostalgic tickle or two – an impressive feat on a small budget.

And although this is an ensemble piece, it is carried, without doubt, by a superb Craig Miller as family patriarch Carol Newquist. Hilariously irascible, Miller delivers his long-suffering husband, father and city-dweller with perfect pitch and Feiffer-esque believability. Yet as funny as he is, he is also the voice of the times; the middle-class man in an angst he has only just begun to notice and articulate. As things escalate, his unraveling is dimensional and authentic, underpinning Feiffer’s final absurdity with the emotion it needs.

Also strong here are Robin Covington as the formidably twisted but charming Patsy and James Finley as her emotionally immovable beau Alfred Chamberlain. Covington gives it large and loud and in Feiffer’s context it almost always works. She utterly gets that Patsy is a walking, talking construct that can’t be taken too literally or too seriously. The same is true for Finley who, to his credit, also imbues his remote Alfred with a kind of boyish innocence instead of the offhand style popular in some films of the ’60s.

And that speaks to another issue TACT grapples with every time it stages a play we may have seen filmed or televised: how to be authentic and true to another era without simply imitating. Here, director Ellen Dempsey strives to keep Feiffer’s mood and momentum while allowing her actors to bring something original. It is a difficult balance to maintain and there are times and transitions here where the mood slips into a slightly contemporary realism that tends to deflate the play’s tone and wit.

In the challenging role of Marjorie, Newquist mother and wife, Emily Morrison grapples valiantly with this easily unhinged woman, but this is perhaps the one place where it would have paid to be more stylized than literal. Tasked with much unpredictable crying, yelling and general weirdness, Morrison gives a very deliberate, rather loud, interpretation which never quite gels. Finding the equilibrium is Steve Lebens, who delivers Judge Stern’s slightly thought-provoking monologue with just enough ironic artifice to keep it as amusing and afloat as Feiffer intended.

In the smaller but quite difficult role of Kenny, the Newquist son, Evan Crump plays the more humorous moments well but tends towards an understated realism. In this construct of high satire, this diminishes Kenny’s impact, even though he remains a memorable presence. Finally, Bill Gordon carries his existential pastor Dupas with good charisma and a convincing hippie-patter, even if his tunic fails to evoke the thrift stores where he would have undoubtedly and proudly shopped.

And so there is a little unevenness here and a few moments when even the excellent Craig Miller cannot completely carry the moment. But far more often, and certainly overall, TACT delivers on Feiffer’s clever and amusing fantasy of an urban middle-class meltdown.