Tennessee state senator Stacey Campfield continued his media campaign against homosexuality and discussions about gay lives in schools by appearing on the David Pakman Show. 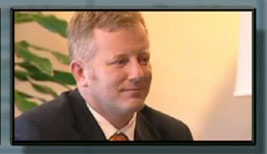 During his 10-minute interview on Monday, Campfield seemed to indicate that insurance companies raise their rates for homosexuals. He claimed this to be true because the companies have statistics showing that gays, when compared to others, live significantly shorter lives — by a full 24 years!

“Well, obviously, like I said, it’s not a healthy lifestyle. It’s very dangerous. The average homosexual, for a variety of reasons, has a lilfespan of about 24 years shorter than the average person…. Actually, there’s, uh, statistics for insurance companies who do that sort of thing.

“Look at insurance statistics. If you are a homosexual man, your insurance rates go through the roof, and the reason is because you have so much shorter life span…. Life insurance.”

Campfield either could not or chose not to elaborate futher on this latest stunning claim. He did seem to say that homosexuality did not exist in the animal kingdom because:

The senator added that he did not believe more bullying laws needed to be added to protect gay students. (Two teenagers committed suicide in Tennessee recently. Reports say they suffered through years of bullying.) Campfield said he did not think anyone should be bullied; but then claimed gay people choose to engage in homosexual activity, therefore, it is right to conclude that people choose to be gay.

The only other bright point heard in Campfield’s gay-obsessed concerns came when the discussion moved to the recent incident where he was kicked out of a gay-friendly restaurant. David Pakman suggested that Campfield might have a sense now of what it feels like when homosexuals are discriminated against. Campfield replied:

“I’ll be honest with you. I would not frequent a place that said, ‘We’re not going to serve homosexuals’ in a restaurant. I wouldn’t go there…. I don’t think we should be discriminating based on that. I don’t think that’s a valid reason.”