Michael Fitzgerald, Approved on 91-6 Vote, Will Be First Out LGBT Federal Judge Outside New York 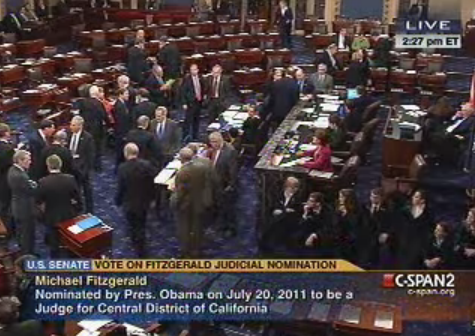 Michael Fitzgerald, an out gay California lawyer, received overwhelming approval today from the U.S. Senate, with a 91-6 vote, for his nomination to serve as a federal judge on the U.S. District Court for the Central District of California — making him the fourth out LGBT federal, lifetime-tenured judge in the nation.

Fitzgerald’s confirmation will make him the first out LGBT Article III judge serving outside of New York City. Article III judges — referencing the judicial powers detailed in the Constitution — are nominated by the president, given consent by the Senate to serve and have lifetime tenure.

The vote, which began a little after 2:24 p.m. today, came after Senate Majority Leader Harry Reid (D-Nev.) on Monday, March 12, announced that he would be forcing debate and votes on 17 of Obama’s judicial nominees if no deal was reached. On Wednesday, March 14, an agreement was reached between the parties’ leaders to have the Senate vote in the coming weeks on 14 of President Obama’s judicial nominees — including Fitzgerald.

No one spoke in opposition to the nomination, the vote on which was announced by Sen. Bernie Sanders (I-Vt.), who was presiding. Senators voting “no” were Sens. Roy Blunt (R-Mo.), Jim DeMint (R-S.C.), James Inhofe (R-Okla.), Mike Lee (R-Utah), Rand Paul (R-Ky.) and David Vitter (R-La.).

Fitzgerald, who was nominated by President Obama on July 20, 2011 for the judgeship, had a hearing in October 2011 and was reported by the Senate Judiciary Committee to the full Senate without opposition on Nov. 3, 2011.

[UPDATE @ 3:15P: In a statement, Sen. Barbara Boxer (D-Calif.), who strongly backed the nomination, said of today’s vote, “The federal bench in California will gain an extremely talented new judge as a result of today’s historic vote to confirm Michael Fitzgerald. His sharp intellect and broad legal experience will make him a tremendous asset to the people of the Central District.”

Of the Senate process on nominations, however, she added, “While I am pleased by today’s overwhelming vote, it is shameful that he had to wait so long for a vote and I hope that Republicans will stop blocking the confirmation of highly qualified nominees.”]

Fitzgerald received an American Bar Association rating of “unanimously well qualified.” A former assistant U.S. Attorney, he is a lawyer with Corbin, Fitzgerald and Athey in Los Angeles.

As a federal prosecutor, according to his law firm’s web biography, he handled more than twenty criminal trials and filed over thirty briefs in the Ninth Circuit. His cases included the successful prosecution of a money-laundering ring masquerading as a legitimate business.

At Fitzgerald’s confirmation hearing, Sen. Dick Durbin (D-Ill.) had asked Fitzgerald specifically about a case on which he had worked earlier in his career, Buttino v. FBI.

In Fitgerald’s written questionnaire provided to the committee, he described the case, writing, “[Frank] Buttino was a gay FBI special agent who was anonymously ‘outed’ to his Special Agent-in-Charge, which ultimately resulted in the removal of his security clearance and concomitant firing as an FBI special agent.”

Buttino filed a class-action lawsuit against the Bureau, and, at Fitzgerald’s request, he and his firm — Heller, Ehrman, White & McAuliffe — represented the class at trial. After several days of trial, the case settled, with the FBI making significant policy changes as a result.

At the confirmation hearing, of the result Fitzgerald said, “The FBI agreed to no longer use security concerns as means to keep gays and lesbians from being hired as special agents, and Mr. Buttino’s pension was restored.”

A search of his political contribution history on OpenSecrets.org shows that Fitzgerald contributed the maximum amount — $4,600 — to Obama’s 2008 presidential campaign.

The Senate previously has confirmed two out LGBT lawyers nominated by Obama, Judges Paul Oetken and Alison Nathan, both of whom sit on the U.S. District Court for the Southern District of New York. Oetken’s nomination was approved 80-13, including a majority of the Republican caucus voting for his nomination. Nathan, however, only was approved 48-44, and faced significant floor opposition — although her sexual orientation was not directly raised in the debate — and received no “yes” votes from Republicans.

Obama withdrew the name of one nominee, appellate nominee Edward DuMont, after the Senate refused to act on the nomination.

Oetken and Nathan joined the only other out LGBT Article III federal judge, Judge Deborah Batts, who was nominated by President Clinton and has announced that she will be taking senior status on April 13. Now-retired Judge Vaughn Walker, who is gay and oversaw the Proposition 8 trial in 2009, had served as a judge in the U.S. District Court for the Northern District of California, but he did not speak publicly about his sexual orientation until after his retirement.