Pressure is mounting on the Boy Scouts of America in the wake of the organization’s decision last week to uphold a ban on out gay members and leaders.

Thousands have lent their names to multiple petitions opposing the 102-year-old organization’s longstanding exclusionary policy and raised questions over how the organization reached their decision.

The ban’s reaffirmation came after the recommendation of an 11-member committee that studied the issue for two years. The committee consisted of ”volunteers and professional leaders” who represented ”a diversity of perspectives and opinions,” according to a statement from the BSA.

BSA leaders have repeatedly refused to say who exactly the 11 committee members were, how they were chosen, or specifically how they reached their decision, except to say that their ”review included forthright and candid conversation and extensive research and evaluations – both from within Scouting and from outside the organization.”

Spokesman Deron Smith told the Associated Press that the BSA’s decision to uphold the ban was based largely on support from parents and is “absolutely the best policy for the organization.”

According to their website, the Boy Scouts do not ”proactively inquire about the sexual orientation of employees, volunteers, or members,” but they also do not ”grant membership to individuals who are open or avowed homosexuals or who engage in behavior that would become a distraction to the mission of the BSA.”

It is worth noting that Boy Scout troops are supported by outside groups, with many receiving sponsorship from the Catholic Church and the Church of Jesus Christ of Latter-day Saints. The Los Angeles Times reports that of the BSA’s 2.7 million members, about 400,000 are Mormons and the Mormon Church encourages members to join the organization. 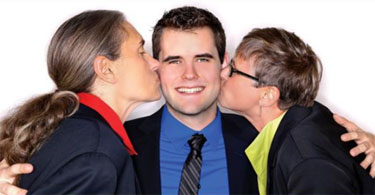 Although the announcement appeared to be an attempt to silence years of criticism leveled against the organization since the Supreme Court upheld the exclusionary policy in 2000, it has done anything but.

Eagle Scout Zach Wahls, who is the son of lesbian parents and became an Internet sensation in February 2011 after testifying in favor of marriage equality before the Iowa House of Representatives, has become a leading critic of the BSA’s exclusionary policy. Eagle Scout is the highest-attainable Boy Scout rank.

”What we’re seeing here are a few key players setting a policy for millions,” Wahls told Metro Weekly. ”By using a secret committee of that few people they’re able to set a policy like this. That’s why they’ve had to use that tactic.”

Founder of Scouts for Equality, which lists more than 800 members, 600 of whom are Eagle Scouts, Wahls hopes to show BSA leadership where the next generation stands. He delivered almost 300,000 signatures to the BSA’s annual convention earlier this year urging an end to the ban. In response to the secret committee’s decision, Wahls has drafted a new petition calling on the BSA board, whose names are public, to vote on the matter instead of the secret committee. As of July 24, he has more than 135,000 signatures.

And Wahls isn’t the only one using a petition to make a point. Jennifer Tyrrell, who was ousted as den leader of her son’s Cub Scout troop three months ago because she is a lesbian, brought three boxes filled with more than 300,000 signatures supporting her reinstatement to the BSA’s Dallas headquarters last week. Although a BSA spokesman met with Tyrrell, her petition was not accepted. She’s garnered about 20,000 new signatures since then.