With Anderson out, colleagues praise the move as “honest,” saying he’s “helped many” 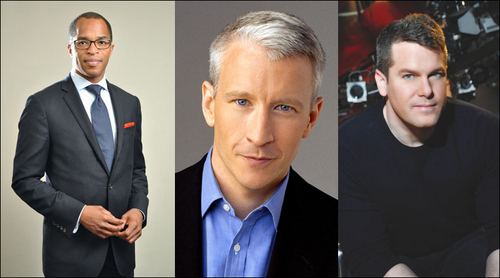 Today’s coming-out letter from Anderson Cooper to Andrew Sullivan, while not a surprise to some, is drawing praise from some out colleagues.

MSNBC anchor Thomas Roberts, who is out and engaged to Patrick Abner, tells Metro Weekly:

“I think it is great and time. I consider Anderson a friend and wish him nothing but personal and professional happiness. I don’t think his raw honesty will hurt him and, with or without knowing it, he has helped many.”

Over at The Washington Post, Jonathan Capehart, the out editorial columnist who spoke with Metro Weekly‘s Sean Bugg in 2011, likewise celebrated the news, telling Metro Weekly:

“Anderson Cooper is widely respected and popular for a reason. Letting the wider public in on what his friends, family and colleagues have long known only enhances his stature as a an honest and thorough journalist.”

Back in March, Roberts had spoken with Metro Weekly before his appearance as the emcee at the annual Servicemembers Legal Defense Network dinner. He talked at length about the importance to him of his being out — and his view that the choices that others make are their own:

It’s easy for me to stand on the other side of having decided to be publicly out six years later and act self-righteous about it, but I’m confident that this is the place where I need to be. I don’t want to cast aspersions or judgment on anybody else. I’m just glad that I’m where I am. And that, while other people may choose to stay more off the radar on this, that’s their choice.

Would I personally want to be out there being at the forefront of these issues and not having people know who I really was? No. I like the fact that people know who I am. And if they don’t, they can Google me real fast and figure it out.

I’m not perfect — by far not perfect — but I’m somebody who’s waking up every day, I’m finding my own happiness professionally and personally, and I think that the kids in this country who are struggling need to know that. They need to have people that they can look at and be like, “You know what, this is achievable, there is hope.”

Earlier this year, Cooper competed on Jeopardy‘s Power Players Week, where he won $50,000 for The Trevor Project, which bills itself as the leading national organization providing crisis intervention and suicide prevention services to lesbian, gay, bisexual, transgender, and questioning youth.

In his note to Sullivan, Cooper referenced youth bullying as part of his reason for coming out publicly today, writing:

[W]hile as a society we are moving toward greater inclusion and equality for all people, the tide of history only advances when people make themselves fully visible. There continue to be far too many incidences of bullying of young people, as well as discrimination and violence against people of all ages, based on their sexual orientation, and I believe there is value in making clear where I stand.

The fact is, I’m gay, always have been, always will be, and I couldn’t be any more happy, comfortable with myself, and proud.

The president of the National Lesbian and Gay Journalists Association, David Steinberg, said in a statement:

“NLGJA appreciates Anderson Cooper’s honesty and his decision to publicly come out. Our members share his sentiment that as journalists, not activists, we have a significant role to play as advocates for fair & accurate coverage of the LGBT community in the mainstream media. We have worked hard to ensure that all journalists are comfortable being out in the newsroom and having it not be perceived as detrimental to their ability to do their job.”