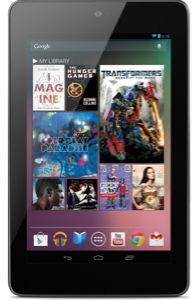 CNET’s Eric Mack has a great essay about his unbridled adoration for Google’s Nexus 7 tablet….

Could this really be it? Could the Nexus 7 really be the only one for me? Is it time to settle down into mobile device monogamy?

I know many of you already use your iPads and other tablets to send e-mails and do much of the above, but for full-time writers like myself, the notion of the touch screen replacing the satisfying haptic feedback of a clicking keyboard is disturbing at best, and reason to go back to the quill and ink bottle at worst.

Yet with the Nexus 7 in my hands, I felt at home with the touch screen for the first time. Android Jelly Bean has improved what worked from previous iterations and integrated enough of what works in iOS to feel almost as comfortable for being lightly productive as Windows does. If I were to look into adding a Bluetooth keyboard (I’m planning to soon), or I were a Linux hacker at heart, I’m sure it would feel even more homey.

After spending time with the Nook, Kindle Fire, and iPad, it’s amazing that Google has made it even easier to take the Nexus 7 with you. My instinct is to use it as a communications device as much as an entertainment and productivity hub.

He isn’t rosy about everything, however:

There are some basic things missing, like more optimization for landscape mode and better productivity apps. Fortunately, Asus has some experience working on such things with its Transformer line, so perhaps it’s worth rooting for the manufacturer’s partnership with Google to grow and prosper.

And, of course, my Nexus 7 will never replace my phone without some sweet 4G LTE service to keep me connected. Hotspotting my smartphone to make calls through my tablet doesn’t make a whole lot of sense.