Hundreds of voters have been spammed with anti-Obama and anti-gay text messages one week before Election Day, soliciting a legal complaint from the Human Rights Campaign. 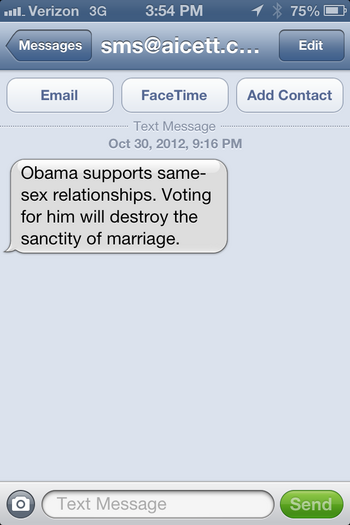 According to The Washington Post, the messages originated as emails and were sent from multiple domain addresses, all of which appear to be linked to Virginia-based ccAdvertising.

The anonymous texts, which may be a violation of federal law, have prompted HRC to file a complaint with the Federal Communications Commission.

“It’s unsurprising that our opponents are employing such underhanded tactics and trying to attack equality from behind shrouds of secrecy,” said HRC Vice President of Communications Fred Sainz in a statement announcing that the nation’s largest LGBT-rights organization would ask the FCC to investigate the incident.

“HRC is filing a complaint with the FCC so that these types of organizations know there are consequences for their actions,” Sainz added. “It’s unacceptable to launch these types of despicable attacks from dark corners, and it’s incredibly irresponsible to send out unsolicited messages to people who have no desire to receive this type of vitriol.”

The bulk of the texts were sent Tuesday evening and were received by Democrats and Republicans alike. Many of the domain names from which the texts originated were registered with GoDaddy.com, which revoked the anonymity of the registrant and suspended their account for violating spamming rules on Wednesday morning.

Early Wednesday, the domain registrant was ccAdvertising COO and failed Virginia state Senate candidate Jason Flanary, but by afternoon the registrant name had been changed to G. Joseph. The CEO of ccAdvertising is Gabriel Joseph III. Both Joseph and his firm have frequently been in the news in connection with questionable advertising practices on behalf of conservative politicians and causes.

It is not yet clear who funded the messages, although ccAdvertising has worked for a number of conservative causes in the past.

The Washington Post reports that while spam text messages are illegal under federal law, emails are not. Because these text messages originated as emails, it appears they may have exploited an FCC loophole.