Freedom to Work doubles down on push for LGBT workplace protections

With momentum building for what is considered one of the last major pieces of LGBT-rights legislation — the Employment Non-Discrimination Act — the organization dedicated solely to its passage is ramping up efforts to see ENDA finally become law this year.

“In 2011, we saw a need in the LGBT movement,” Freedom to Work founder and President Tico Almeida recently told Metro Weekly. “We saw how effective Freedom to Marry had been in pushing marriage to the forefront of the LGBT agenda. We saw how effective [Servicemembers Legal Defense Network] and Servicemembers United had been pushing ‘Don’t Ask, Don’t Tell’ repeal. ENDA was the only issue within the LGBT movement that did not have a single issue specialist organization dedicated to it exclusively.”

Nearly two years after its founding, Freedom to Work has seen an increase in donations from small and large contributors and is staffing up as ENDA begins to see movement in the Senate and as the White House faces increasing pressure for President Barack Obama to sign an executive order prohibiting federal contractors from anti-LGBT workplace discrimination.

Almeida, who was lead counsel on ENDA for the House Committee on Education and Labor from 2007 to 2010, says Freedom to Work has raised several hundred thousand dollars in the past year and will now be joined by a new staff dedicated to shoring up the support needed to see ENDA become law

Gender Rights Maryland Executive Director Dana Beyer will assume the role of chair of Freedom to Work’s national advisory board and Scott Wooledge, a writer for the Daily Kos progressive blog, is spearheading the group’s aggressive social-media strategy that hopes to, in part, combat a faulty impression by a majority of Americans that ENDA is already law.

Perhaps most notably, Christian Berle, who has served on several Republican campaigns and as deputy executive director of Log Cabin Republicans before leaving in 2012 to work for out congressional candidate Richard Tisei’s campaign in Massachusetts, will serve as Freedom to Work’s legislative director.

With only a handful of Democratic holdouts remaining on ENDA, Almeida says Berle’s Republican connections are not a coincidence. “It is our goal to visit every Republican office,” Almeida said. “We will meet with the most conservative Republicans if they give us the meeting.”

In a statement, Republican Rep. Richard Hanna (N.Y.) praised Berle and said he looks “forward to his work to help build broad bipartisan support for this critical legislation.”

“With ENDA, no Republican, Democrat, or Independent’s door should go unvisited and every avenue should be explored to keep the pressure on the leadership in the Senate and the House to bring this important bill up for a vote,” Berle said in a statement.

ENDA received its 50th cosponsor in the Senate last week after Majority Leader Harry Reid (D-Nev.) signed on to the bill. It was Sept. 10, 1996, that ENDA came one vote shy of passage in the U.S. Senate, just hours after the same body overwhelmingly approved the Defense of Marriage Act, forbidding federal recognition of same-sex marriages. Nearly 17 years later, as marriage equality has entered the mainstream and the Supreme Court weighs the constitutionality of DOMA, there has yet to be another vote on ENDA. That is expected to change this year, at least in the Senate, with a committee markup of the bill anticipated in July. 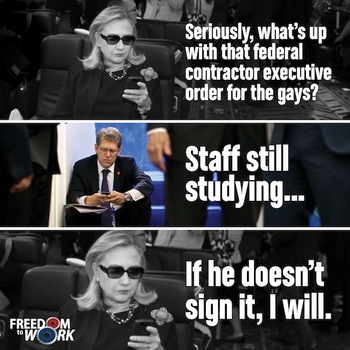 While Almeida credits Evan Wolfson’s Freedom to Marry as being a key model to Freedom to Work’s development, he adds that ENDA holds disadvantages to marriage-equality advocacy. “Marriage is aspirational,” Almeida said. “If you are a gay teenager you grow up dreaming of being one half of a gay marriage. You do not grow up dreaming about getting fired from your job because you are gay and then using a federal statute to file a claim in federal court to maybe get redress for what happened to you. That is not aspirational.”

Despite those disadvantages, the group is undertaking what they call a first for the LGBT-rights movement, conducting a “testing strategy” to catch companies engaged in anti-LGBT discrimination.

According to the complaint filed last month by Freedom to Work and the law firm Cohen Milstein Sellers & Toll, which focuses on civil rights and employment law, Freedom to Work conducted a “test” in December 2012 that allegedly showed ExxonMobil in violation the Illinois Human Rights Act after the company appeared to give preference to a non-LGBT applicant who was less qualified than an LGBT applicant. The complaint states that both résumés showed the two female applicants involved in activist organizations, but the more qualified applicant was involved with the Gay & Lesbian Victory Fund and the less qualified applicant was involved with a local feminist organization.

ExxonMobil is one of the federal government’s top contractors – receiving $505 million taxpayer dollars in contracts in 2012 – with no LGBT-nondiscrimination policy. On May 29 during the company’s annual meeting in Dallas, ExxonMobil shareholders voted overwhelmingly, for the 14th consecutive year, to reject a resolution to adopt such a policy.

The testing strategy, which began in December 2012 and will continue as a new batch of résumés are sent out this week, has garnered the attention of the national media and enticed some of Freedom to Work’s biggest donors, including the Gill Foundation, the David Bohnett Foundation and donor Jonathan Lewis.

“For years our organizations have wrung their hands trying to figure out how to put a face on LGBT workplace discrimination and have ignored this historically proven strategy,” Lewis said in a statement, “I am proud to have given the seed money last year and operating funds this year to Freedom To Work for their testing initiative and would encourage other donors who want a return on their investment to consider a donation since it must continue until we have succeeded in getting the President to make good on his promise to sign the executive order and Congress passes an inclusive ENDA.”

At the same time ENDA’s optimistic prospects in the Senate have moved the issue to the front burner for many LGBT groups, the push for Obama to end discrimination today with the flick of his pen has also seen increased momentum in recent weeks following the heckling of first lady Michelle Obama over the issue at a private fundraiser. Although Almeida largely blames senior staff at the White House and the president’s spokespeople for their passive support for ENDA over an executive order, he also says Obama has been “missing in action” on building support for ENDA.

“I think there is a tiny, tiny, tiny chance that ENDA is signed into law in the next year,” Almeida said. “I think there is a more significant chance the president will sign the executive order covering a quarter of the American workforce this year. I do think the staff has made a horrible blunder that they have dragged their feet on for over a year, but the president is the decider. The president made the campaign promise in writing, it’s his record and his word that will be judged by history if he breaks this promise.”