Back in the mid-’90s Bette Midler took inspiration from Bernadette Cooper for her popular Diva Las Vegas revue. ”They love me, they hate me, but they all say, I look good,” Midler said, performing a number originally written by Cooper.

And now Cooper is returning the favor while also, in a sense, reclaiming ”I Look Good,” which the late gay-club superstar DJ Peter Rauhofer further remade as one of his signature dance hits under the handle Club 69. 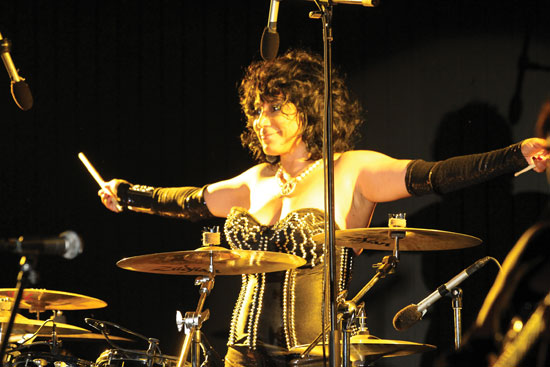 ”For three or four years now I’ve wanted to do a show, kind of like Bette Midler on steroids — or acid,” explains Cooper. In Klymaxx featuring Bernadette Cooper: Diva and A Turntable, Cooper gets into character as an aging diva trying to keep up with two incredibly talented singers, played by Erin Stevenson and Myra Washington, whom she teasingly calls ”young bitches.” Washington also doubles as a DJ on the titular turntable, with additional support from sharp drummer Del Harrison.

For the amusing show, Cooper and company perform ”I Look Good” as well as other songs you no doubt know from Cooper’s repertoire. The focus is chiefly on her hit-making career as the founder and leader of the ’80s-era all-girl group Klymaxx — think sassy funk jams ”Meeting In The Ladies Room” and ”The Men All Pause,” or the R&B ballad ”I Miss You.” The band was slightly ahead of its time in the way that Cooper talked, even lightly rapped, as much as she actually sang her lyrics.

A native of Los Angeles, Cooper is ”completely 100 percent devoted to music” after getting sidetracked by other business and personal pursuits. She intends to bolster her revue by continuing to tweak its content as well as adding technology to allow for graphical projections. She also wants to make sure the show finds its natural gay audience. At least during a recent version of the show in New York, Cooper included a number criticizing a closeted ”Down-Low” subculture, and she offered a pro-marriage-equality shout-out to our now ”DOMA-free” country.

”When I first started putting this concept together, I told my promoter I wanted to focus on the gay community and do more gay festivals, ’cause I just think they would love it,” Cooper says. ”If I didn’t do anything else but gay events every year, I’d be fine, because I love to serve the fabulous energy.”