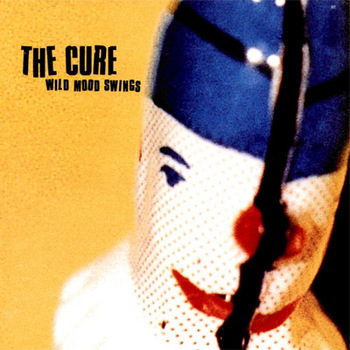 By the mid-90s, The Cure had become an arena-rock supergroup. Their ascent to mega-success was a long and slow journey. Their 1979 debut album “Three Imaginary Boys” was an odd but potent collection of compact power-pop that would bear little resemblance to their later work, apart from the keen sense of melody.  Then of course they went much darker, with a trio of classics — the sparse and brilliant “Seventeen Seconds” in 1980, the epic and funereal “Faith” in 1981, and the drug-induced madness and venom of “Pornography” in 1982.  After that came the big left turn, the synth-pop single “Let’s Go to Bed” and its follow-up and big chart breakthrough in the UK, “The Walk.”  The marriage of Robert Smith’s irresistible pop sensibilities and his intensely darker side would become the new template for The Cure.  Albums like “The Top,” “The Head on the Door” and “Kiss Me Kiss Me Kiss Me” would all veer schizophrenically from euphoric pop songs to grandiose, morose epics like “Sinking” and “The Snakepit.” The Cure’s signature became their bipolar nature — manic pop like “Why Can’t I Be You?” and “Close to Me,” glistening classics like “Just Like Heaven” and “Inbetween Days,” cathartic freak-outs like “Shiver and Shake” and “Give Me It,” and solemn and emotional pieces like “The Top” and “If Only Tonight We Could Sleep.”

The Cure reached their creative apex with 1989’s “Disintegration” — a perfectly realized album of vast scope and power that remains their finest work, and one of the best albums of the ‘80s.  Already a college-radio favorite in America, they broke through in a big way with “Disintegration.”  It was highlighted by four classic singles:  “Fascination Street,” “Lullaby,” “Pictures of You” and the monster hit “Lovesong,” which rocketed all the way to #2 on the Billboard Hot 100, kept out of the top by Janet Jackson’s “Miss You Much.”  The Cure had achieved a level of commercial success unimaginable in their earlier years, and it would only continue to grow with their 1992 album “Wish.”  It became their most commercially successful album and landed at #2 on the Billboard Top 200 album charts. The Cure launched a hugely successful arena tour in support of it, and for a while they were one of the biggest bands in the world.

Then their commercial fortunes started to change.  There were some lineup changes (not unusual for The Cure), and it took four long years for their next studio album. By the time “Wild Mood Swings” finally arrived in 1996 alternative rock had changed and The Cure no longer fit comfortably into a radio format that favored heavy guitar-rock bands influenced by the emergence of Nirvana, Pearl Jam, Alice in Chains and others.  That might not have mattered as much if the album was great, but “Wild Mood Swings” was generally lambasted by critics and was met with general disappointment by fans.  The lackluster reception was only amplified by the poor single choices. The wonderfully unhinged first single “The 13th” is a demented classic, complete with a brilliantly weird video…  but as a first single to launch the album, there was zero chance for crossover success on the pop charts.  Second single “Mint Car,”  an obvious grab for a commercial hit, fared poorly, as did two follow-up singles.

“Wild Mood Swings,” in retrospect, is generally regarded by many (if not most) Cure fans as one of their weakest albums.  And as it was presented, it’s true:  it IS weak, which is unfortunate because the material was there — it just wasn’t presented properly.  “Wild Mood Swings” was a missed opportunity, and with the benefit of hindsight and a little revisionist history, it might have been a worthy follow-up to the mega-successful “Wish” instead of a commercial failure.  Classic album revisited?  Perhaps more accurate to say “potential classic album reinvented.”

The Cure has always been known for their brilliant b-sides.  Even in their earliest days their non-album b-sides have been some of their best work. Tracks like “Splintered in Her Head,” “I’m Cold,” “The Exploding Boy,” “A Chain of Flowers,” “2 Late,” “The Big Hand,” “This Twilight Garden,” “Harold and Joe” and numerous others have remained fan favorites.  They were collected in the fantastic box set “Join the Dots” released in 2004.  Some of these b-sides were certainly good enough to be on the albums proper, but the albums themselves were so strong overall that having them as b-sides was good enough.  But in the case of “Wild Mood Swings,” it was all a matter of song selection and sequencing.  The potentially great album that it should have been is right there, with the right song choices and configuration. “Wild Mood Swings” is an example of an album that was doomed because many of the strongest songs were inexplicably left off the album in favor of tracks that were significantly weaker.

There is no disputing the power of the album’s opener, though. “Want” is one of the best things the band ever recorded. Starting with a swirling guitar riff and then building slowly in intensity as it goes, “Want” is another in a long line of powerhouse opening tracks on Cure albums. It doesn’t get more spine-tingling than when Robert Smith wails at the song’s emotional apex: “I want the sky to fall in, I want lightning and thunder, blood instead of rain!” The band obviously recognizes the power of the song, as they still perform it regularly.

But then things go awry. The rest of the album is a haphazard collection of varying styles — and in that way it’s no different than many of their prior albums, but in this case some of the material just isn’t up to par. Particularly atrocious is “Gone,” a throwaway that was somehow deemed worthy not only to be on the album, but to be a single. “Strange Attraction” is one of the band’s weaker attempts at a pop hit, and the utterly inconsequential “Mint Car” is a pale imitation of far better guitar-based pop songs like “Inbetween Days” and “Friday I’m in Love.”  Album closer “Bare” is an 8-minute slog – – “Bore” would have been a more appropriate title.

There are moments of greatness, though. “Treasure” is gorgeous and sad, and “Jupiter Crash” is a classic atmospheric Cure ballad. “The 13th” may have been an ill-advised first single, but as an album track it’s a twisted pleasure. “This is a Lie,” “Trap” and “Club America” are all quality tracks, and “Round & Round & Round” is a catchy little ditty. The wonderfully manic “Return,” with its frenetic horn section and dizzying melody, would have been a far better single than any of the tracks actually chosen.

The best choice for lead single, though, didn’t even make the album. How a song like “A Pink Dream” could have been relegated to b-side status is a mystery. A swirling, psychedelic pop song built around chiming acoustic guitar, a lovely melody and dreamy imagery, “A Pink Dream” would have been by far the best choice to lead off the project. “A Pink Dream,” along with “Return,” would have fit very nicely onto The Cure’s greatest hits collection had they been given the exposure they deserved.

“A Pink Dream” wasn’t the only questionable exclusion. The highly rhythmic “Adonais,” with its propulsive string arrangement and vocal effects, is another song that far exceeds the quality of almost everything else that made the album, but it too was left to languish as a b-side.  Same with the gently melodic “Home,” and the mid-tempo rocker “Waiting.”  Another b-side, the long, psychedelic and searingly intense “It Used to Be Me” would have made for a far better conclusion to the record than the dreary “Bare.”

Imagine “Wild Mood Swings” released in an entirely different configuration, led by “A Pink Dream” as first single, then “Return” as the follow-up. Up to par with their finest work?  No. But far better than what was released, and an album that would be a worthy successor to “Wish” in the band’s discography:

“Wild Mood Swings” would go on to be The Cure’s lowest-selling album since “The Top” twelve years earlier, and would mark the beginning of a general descent in their commercial relevance as a studio band. The three albums since — the generally excellent “Bloodflowers” from 2000, their almost unlistenable 2004 self-titled album (the worst of their career by a wide margin), and their generally uneven 2008 release “4:13 Dream” have all sold modestly. That said, they still pack huge crowds into their epic live shows, treating fans to marathon sets that span their entire career and often extend to nearly 4-hours.

There are certain albums that have been released by great artists that didn’t quite hit the mark at the time, but as the years go by and with the benefit of hindsight can be reassessed.  Seventeen years have passed since “Wild Mood Swings” and we live in a world of digital music and playlists (or, for the old-fashioned, blank CDs) where fans can easily reinvent an album more to their liking. Perhaps that is a heresy of sorts and a violation of the artists’ original vision…  but albums, like anything else, are merely snapshots in time of a particular configuration. Perhaps “Wild Mood Swings” would have looked markedly different had the final track selection been compiled a week later, or the day before. Who knows? Artists often juggle songs on and off final track-listings until they have no more time to juggle and the album has to be turned in. Once it’s done, it’s done and it’s set in stone. That said, some artists, like Morrissey and The Waterboys, for example, have actually tinkered with the track-listings on some of their albums for reissues — adding and deleting certain tracks to make them (at least, in their view) stronger. David Bowie deleted a particularly embarrassing track (“Too Dizzy”) from his infamous “Never Let Me Down” album when it was reissued. “Wild Mood Swings” is a lesson in what-might-have-been, and illustrates the challenges any artist faces when deciding the composition of an album. Perhaps it still would have fared poorly commercially compared to the mega success of “Wish” and “Disintegration” — it would have been hard to adequately follow-up those records under any circumstance. But “Wild Mood Swings” didn’t have to be the commercial and critical disaster that it turned out to be. The core of a great album is there — it’s just a matter of joining the right dots.