By John Riley on November 13, 2013 @JohnAndresRiley 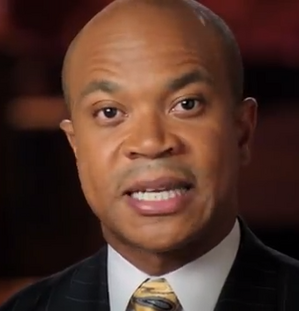 Several outlets, including The Washington Post, first broke the news after midnight that Mizeur will name the Rev. Delman Coates, the senior pastor at the 8,000-member Mt. Ennon Baptist Church in Clinton, Md., as her running mate. Mizeur’s campaign later confirmed her selection of Coates in an email sent to supporters Wednesday morning. The pair will appear at a press event at American Legion Post 41, located at 905 Sligo Ave. in Silver Spring at 6 p.m.

Coates was instrumental in the passage of marriage equality in Maryland, testifying on behalf of the bill legalizing same-sex marriage before both chambers of the General Assembly and appearing in ads for the pro-marriage organization Marylanders for Marriage Equality urging voters to approve Question 6, the ballot measure that approved the bill previously passed by the General Assembly and signed into law by Gov. Martin O’Malley (D). Coates and Mizeur previously worked together to advocate for Question 6, as well as in opposition to Question 7, which expanded gambling in the state.

Mizeur’s selection of Coates means that all three of the major candidates seeking the Democratic nomination have one member of its ticket from Prince George’s County, the second-largest county in the state in terms of population and home to a significant number of African-American voters. It also means that none of the Democratic slates has a member from the Baltimore area. Mizeur’s chief rivals for the Democratic nomination, Attorney General Doug Gansler and Lt. Gov. Anthony Brown, have chosen Del. Jolene Ivey (D-Prince George’s Co.) and Howard County Executive Ken Ulman, respectively, as their running mates.

John Riley is the local news reporter for Metro Weekly. He can be reached at jriley@metroweekly.com
← Previous Story Hawaii lawmakers vote to legalize same-sex marriage
Next Story → Herring gains 164-vote edge in Virginia AG race ahead of recount