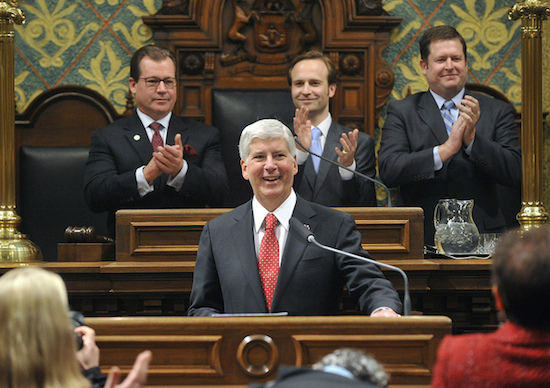 Eight same-sex couples who were married in Michigan before a federal judge’s decision striking down the state’s same-sex marriage ban was put on hold filed a lawsuit in federal court Monday seeking recognition of their marriages.

The lawsuit, filed on behalf of the couples by the American Civil Liberties Union and the ACLU of Michigan in the U.S. District Court for the Eastern District of Michigan, argues that Michigan Gov. Rick Snyder’s decision to suspend same-sex marriages in the state while the case is appealed is in “violation of constitutional protections due to all legally marriages couples and their families.”

“By retroactively stripping Plaintiffs’ marriages of legal recognition, the Governor has placed Plaintiffs and their families in an intolerable state of legal limbo that threatens their wellbeing, health, financial security, and family integrity, and denies their dignity as free and equal citizens,” the lawsuit states. “Absent relief from this Court, Plaintiffs will be unable to access critical protections and benefits for themselves and their families that are enjoyed as of right by all other couples who were legally married in Michigan.”

According to the ACLU, Michigan violated the equal protection and due process clauses of the U.S. Constitution by retroactively invalidating legal and valid marriages entered into by the plaintiffs.

Snyder, a Republican, announced last month that the more than 300 marriages performed after a U.S. District Court judge found Michigan’s same-sex marriage ban unconstitutional and before the Sixth Circuit Court of Appeals issued a stay putting the decision on hold will not be recognized by the state while the case is appealed. Although Snyder stated that those marriages were performed legally, he said in a statement that the Sixth Circuit Court of Appeals decision to halt same-sex marriages from continuing pending a final verdict in the case reinstated Michigan law prohibiting same-sex marriage.

Although those marriages are not being recognized by the state, despite acknowledgment by Snyder that they were legally entered into, they are being recognized by the federal government. Attorney General Eric Holder stated last month that those same-sex couples married in Michigan would be eligible all relevant federal benefits.

The ACLU has filed a similar lawsuit in Utah, where approximately 1,300 same-sex marriages were performed between Dec. 20, 2013 — when a district court struck down Utah’s same-sex marriage ban as unconstitutional in Kitchen v. Herbert — and Jan. 6 — when the U.S. Supreme Court halted further same-sex marriages in Utah pending an appeal.

“As a matter of law and fundamental fairness, the state is obligated to extend the protections that flow from marriage to all those who celebrated their weddings last month,” said Kary L. Moss, ACLU of Michigan executive director, in a statement. “Doing anything less treats legally married gay and lesbian couples like second-class citizens, and adds to the confusion and instability these loving families have endured.”