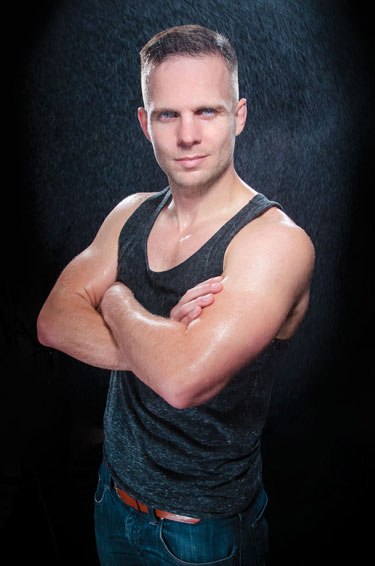 GOSS: That’s okay! When you think of yourself as a “singer-songwriter,” what do you think of? You think Joni Mitchell. Or James Taylor. They’re kind of like the models. That’s what it is in its purest form.

So, when people are like, “Hey, why don’t we put this beat behind it?” they’re really tense. Like, they really don’t want to do that. I spent the past couple years trying to understand what it means to be an artist and embrace what’s good and fun about that. That means being open to different opportunities. Instead of being closed and having a singular vision and saying, “This is the way it has to be,” it’s being open to say, “Wow, that’s really interesting. That’s really resonating with people. How can I learn from that?”

MW: Your style of collaboration must be pretty agreeable, in that collaborators keep coming back.

GOSS: Don’t get me wrong: I have strong opinions. But, at the end of the day, my loyalties lie with what is best for the project. There’s a certain kind of humility that has to come with being a good collaborative artist — or a good artist at all — who is open to listening and open to learning and open to hearing that your idea isn’t the best idea in this specific moment. I think that’s hard.

MW: Are those values you were raised with? Something you learned later?

GOSS: I think it’s both. It’s an evolution. My last record, which I’m very proud of, I played every single note on the record, every single instrument. That was really important. Before that, even though I was making these quality projects, doing amazing things and bringing a lot of people together, I’m not sure that I thought much of myself as an artist or believed in my own artistic vision as much. I don’t want to say it came from a lack of self-confidence. I’ve always been able to say, “This is what I want.”

MW: You’ve got that competitive background, as a wrestling champ. But entering seminary shows your humility. It’s an interesting mix.

GOSS: That’s a good insight, because I do think, all my life, I’ve always believed that I’ve failed at everything I did.

MW: When did that change?

GOSS: I don’t know if that ever has really completely changed. I think it’s because I grew up being so competitive, doing things that had very clear winners and losers, very much black-and-white things.

MW: Beyond the wrestling?

GOSS: Sure. Life! You’re talking about sports. You’re talking about school. I find competition really fun. It’s my whole family. If you hung out with my family for 20 minutes, you would be part of 20 competitions. I grew up in a big gymnastics family. I was competing in gymnastics since I was 2. My parents owned a gym. I’m pretty aggressive, in general. I’m pretty straightforward. A lot of that’s been tempered as I’ve gotten older, but I was pretty angry then, too. I was getting into a lot of fights.

GOSS: All of them. [Laughs.] I got expelled from school in ninth grade.

GOSS: Yeah. I got into a fight with my football coach.

GOSS: That’s up for debate. I say I didn’t hit him, but other people disagree. It was stupid. I was 14.

MW: It’s hard for me to imagine Tom Goss with anger-management issues.

GOSS: Remember The Jenny Jones Show? Like, “My kid’s out of control!” Or Cartman: “Mm-hmm, I do what I want.” That was kind of me.

MW: After puberty, after adolescence, did your hormones calm down?

GOSS: I essentially went from fighting, to fighting as a sport. I went to college to fight. If you’re doing a sport in college, especially wrestling, it’s all consuming. I used to envy people in other sports, because you could go to practice and then come home and have a life. Wrestling’s different. It’s the time when you’re not at practice that’s the hardest. You can’t eat meals for days on end. Or you can’t drink water. You’re running three times a day in between practice. And you’re doing it all because you want to want to beat somebody else physically. You want to literally beat them up.

It just got really old for me. The idea of moving back to Wisconsin and teaching social studies to be a wrestling coach — because that was really the track — it just felt horrible. The idea of it felt like the most horrible trap I could ever have been part of.