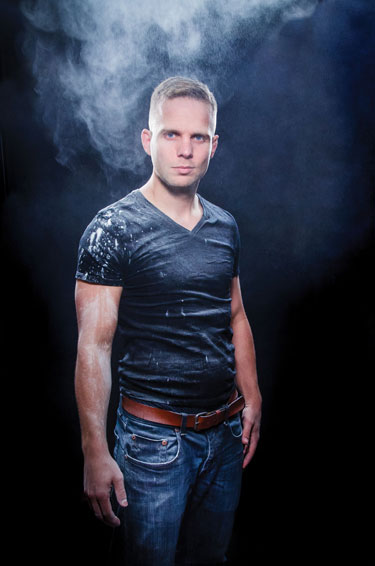 MW: I don’t know about this.

GOSS: I will tell you about it. It’s a film by Rob Williams, who’s done a lot of movies. He’s had some of my music in his movies, so we know each other. Out To Kill shot in November in Tampa. It’s a really fun murder-mystery/comedy-type thing. There’s a character named Justin Jaymes. He’s a really bad, gay pop star. Really hyper-sexual, really manipulative. That’s the role I play. It was an interesting opportunity to do some acting that was — I believe — really different from myself. And to have an opportunity to write songs for a movie in a whole different context. I did a music video for one. It’s probably one of the worst things you’ll ever see, but it’s hilarious.

I’ve been getting some pokes on and off for acting the past couple years. I’m not an actor, I’ve never really done that, so I didn’t really think much about it. But when this opportunity came along, it seemed like a really good fit.

MW: Does Mike go on tour with you?

GOSS: Mike obviously has to work, like a normal person, but comes sometimes. He’ll take a week off and he’ll do Portland to Los Angeles with me, or something like that. I can show you a map, it’s really cute, with different lines to all the places we’ve driven together.

MW: You must be putting a lot of miles on your car.

GOSS: We got a new car this week. There are 242,000 miles on my car. It’s done. So we bought a new car this week. But it’s so nice that we’re afraid to drive it and it’s just been sitting in our garage. We got a Ford C-Max. It’s a hybrid. It’s big and it gets good gas mileage. As soon as we got it, Mike was like, “Oh, no, this is too nice. You can’t take this car on the road!” I tend to agree with him, but I have to.

MW: With your star rising, being out there more, you lose some privacy. And fans can be pushy.

MW: But no restraining orders?

GOSS: No, that was more the seminary days. [Laughs.] Pre-seminary and seminary, I had a lot of stalkers. As horrible as it was, it taught me a lot about boundaries.

Mike and I are monogamous, which I think is different in this community. That’s fine. But I don’t think people necessarily expect that, especially in the bear community. I think, a lot of the time, people assume something else. For the most part, people know and they’re super respectful, but some people like to push the boundaries. If I’m standing there and somebody comes up and decides they like my ass and want to touch it, I’m more than happy to grab their hand and take it off my ass and tell them to stop. I don’t have any problems with that. I’m not a super-timid, shy person.

GOSS: Oh, no, I’ve never had anything like that. I feel like I’m a little bit of a broken record, keep speaking about authenticity, but I think something that draws people to what I do is I’m open and honest about me and my life and my love. If you come to my shows, you’re going to hear stories about Mike. You’re not going to come out of my show thinking, “Oh, Tom’s available.” You’re going to come out of the show loving Mike as much as I love Mike, because you’re seeing Mike through the eyes of me, who loves him so much.

It’s funny. I think people like Mike more than they like me. That’s fine — I love Mike! I hope everybody loves Mike. But when I pass through towns — and he’s been to a lot of the places I’ve toured — people inevitably ask me if Mike is coming. I know that if Mike is coming, more people are going to show up to my show. It’s hilarious. People see Mike as this really amazing, great guy. He’s huggable. That really helps people when they approach me to see me as someone they respect as having a great thing going on. And I do. I don’t have any interest in messing with that balance. It’s a really great balance.

MW: Is there a part of you that would like to just keep his head down, stick with a job like Charlie’s Place full time and not have to worry about the touring, promoting your work, all of that?

GOSS: I really like my career and I think I’ve done a lot of really great things.

The thinking about Charlie’s Place, I really had to ask myself, “Is this it?” Because if this is it, I can balance it for another 10 years, where my career is now and Charlie’s Place. But the answer was, “This is not. This is not the apex for me. I can do more. I can do better. I can create new, beautiful things — and I really want to.” The only way to do that is to let Charlie’s Place go. Part of me feels like an idiot for leaving, because it’s been so good to me. But I see so many more possibilities, so many beautiful things I want to create, so many people I want to meet.

With the exception of being away from Mike, which is always hard, I feel happiest when I’m on the road. Every day, I’m in a new place. I’m meeting new people. I do all this because I want to connect with people. I want to meet people and hear their stories. And I want to tell mine. That’s when I’m happiest.

Tom Goss’s next Washington date is Saturday, May 31, at Sixth & I Historic Synagogue, 600 I St. NW. Tickets are $15 to $20. For tickets, visit tomgossmusic.net. Wait, releasing May 13, will also be available at tomgossmusic.net.