The post-Memorial Day summer season is often associated with cookouts and pool parties. But Art & Soul’s celebrity chef Art Smith is combining the two for a June 5 gathering expected to draw more than 200 people to a rooftop pool just blocks from the U.S. Capitol.

An openly gay, married man who hails from Florida and specializes in Southern cuisine, Smith is partnering with the Liaison Capitol Hill, Metro Weekly, and real estate firm MetroNando to sponsor a “PowerBear Party for Equality” on the Liaison’s rooftop. Guests will enjoy complimentary wine and beer and snack on small bite-sized portions of food from Art & Soul while grilling gourmet hot dogs. Proceeds from the event will benefit the Human Rights Campaign’s (HRC) Project One America, aimed at achieving LGBT equality in Southern states, as well as the DC Center for the LGBT Community. 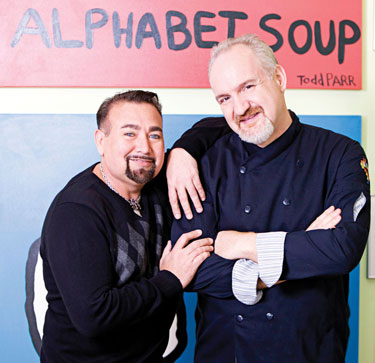 Hubert Tate, the press secretary for Project One America, says HRC plans to hire three individuals for three full-time positions in Mississippi, Alabama and Arkansas, states that currently lack a statewide organization or campaign. The aim of Project One America is to help those states to achieve progress on behalf of LGBT residents, both in the form of marriage equality and nondiscrimination protections in employment, housing and public accommodations.

David Mariner, executive director of the DC Center, says he is grateful that Smith selected his organization in searching for a local LGBT organization that could also benefit from the PowerBear Party.

“Chef Art Smith generously offered to do a benefit for us,” Mariner says. “I don’t know what a PowerBear is, but I look forward to finding out.”

The PowerBear Party got its start from a nickname given to LGBT staffers in the government.

“There are a lot of influential members of the LGBT community who work on the Hill or in government agencies,” says Smith, himself a self-described bear. “A couple of friends of mine happen to be bears, so I call them the PowerBears.”

The PowerBear Party comes just a week before Smith is set to host another fundraiser for equality in Mississippi, where the state legislature passed and the governor signed into law a measure that allows businesses to discriminate against LGBT people. Smith notes that 18 other states already have similar laws in place.

Smith selected the DC Center as a beneficiary of the event on the recommendation of local D.C. organizers, but he similarly supports programs for LGBT youth and teenagers who need services, counseling or a safe space, whether at the DC Center or at the Center on Halsted, the DC Center’s counterpart in Smith’s hometown of Chicago.

Smith says the location of the Liaison’s rooftop, just blocks from the center of power of the U.S. government – and incidentally, where he and his husband, Jesus Salgueiro, held their 2011 wedding reception – is a perfect setting for a benefit centered around promoting equality through the political process.

“I’ve learned with parties that if you…feed people, you’ll get them to stay,” Smith says. “And who doesn’t love hot dogs? And the hotel has a wonderful rooftop pool, so people can wear their swim trunks or whatever underneath their suits!”