Rick Hammerly doesn't ham it up in "The Threepenny Opera"

Bea Arthur played the role of Lucy Brown in the 1954 off-Broadway production of The Threepenny Opera.

“If Bea Arthur could do it, then I figured I could fudge my way through it,” says Rick Hammerly, who dons tight-fitting clothes and properly placed padding to portray the female role in Signature Theatre’s new production of the Kurt Weill-Bertolt Brecht musical. Hammerly, who won a Helen Hayes Award a decade ago playing the title role in Signature’s Hedwig and the Angry Inch, beat out a pool of real women to land the role. “Felicia Curry and I were called in for the same role – this was so bizarre!” he marvels. “Either you want a little short black woman, or you want an old white guy.” 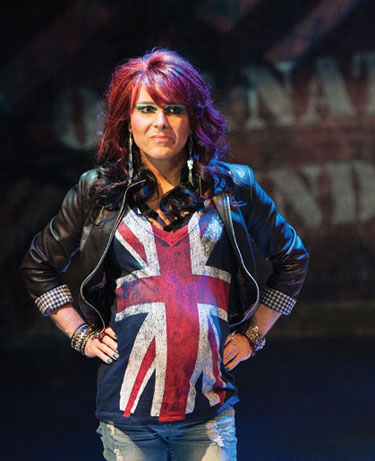 Of course, Hammerly, in his 40s, isn’t exactly old. And he’s playing the role pretty legit. “I’m not playing it, wink-wink, a guy in drag,” he explains. “If I play it for laughs, I don’t get as many.” Hamming it up just doesn’t provoke laughter here as it would elsewhere. “Trust me, if it were a Charles Busch show,” he says, “I would be all over the place. But it really has to be contained in order to work for this.”

In addition to his longstanding acting work, Hammerly is increasingly busy with freelance directing work, such as assisting on Driving Miss Daisy this fall at Ford’s Theatre. He’s also gaining increasing recognition for his fledgling theater company, Factory 449, a collective of fellow stage veterans he assembled five years ago as an avenue to do edgier work, or work that might defy expectations of a particular performer. “I sat down the other night to watch some TV,” he says, “and I had to turn it off because I felt guilty, because there was other stuff I needed to do.”

Hammerly doesn’t even have idle time in The Threepenny Opera. He plays a minor male role in the first act in Signature’s production before spending roughly 50 minutes applying makeup for his second act entrance as Lucy. He also has to insert the padding to round out Lucy’s look.

Jokes Hammerly: “This is the first costume where someone’s built me an ass. And I’ve needed one for years!”