“On a daily basis I’m not a total bitch,” laughs Roy Haylock, better known as drag queen Bianca del Rio. “I can actually be nice to people.”

Clearly, del Rio has gotten a lot farther being tart rather than sweet. The recently crowned winner of the sixth season of RuPaul’s Drag Race, del Rio has made it her shtick to “read” people, generating guffaws by making fun of others’ faults and flaws. But as Don Rickles proved long ago, a self-styled insult comic only ever gets so far being mean. No one likes a total bitch, or a bitter queen. 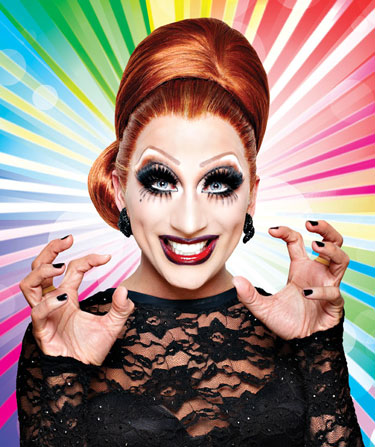 Throughout this year’s season of Drag Race, del Rio showed glimmers of genuine sweetness beneath her exaggeratedly painted, sassy exterior. She even won over most of her competitors on the show. “Bianca is a sweetheart,” says Adore Delano, a 2014 runner-up to the title of America’s Next Drag Superstar. Delano says that while she first considered del Rio a “douchebag,” she eventually warmed up to her to the point that she now counts del Rio as one of her best friends and mentors.

A native of Louisiana, born to parents of Cuban and Honduran descent, the 38-year-old Haylock first developed his clownish drag character Bianca del Rio nearly two decades ago as an outgrowth of training and work in the theater, particularly with costuming and makeup. But even nearly a decade of prolific work on the mean streets of New York City barely prepared del Rio for the intense learning experience of Drag Race. “It was an amazing experience…a lot of work in a very short period of time,” she says. She’s also still getting a handle on the heightened level of fame the show has accorded her, including a continually growing roster of fans on Facebook — over 70,000 strong.

“This is really an overwhelming ride right now,” she says. “I’m grateful.”

METRO WEEKLY: Why did you decide to do RuPaul’s Drag Race at this point in your career, or why did you wait so long?

BIANCA DEL RIO: I really didn’t know if the show was for me, or my type of humor, or my type of drag performance. I had several friends who had been on it previously. I’m not necessarily a lip-sync queen. I did lip-sync when I began, early on. And I kind of felt that I might have been too old for the show. I didn’t know if I was what they wanted. So it just took a minute. And after seeing Jinkx [Monsoon] win last year, and meeting some of the girls, it was kind of like, you know what? Why not give it a shot, see what the possibilities are?

MW: Your character changed, from season premiere to finale — at least through the miracles of editing. How true to life is that portrayal? Do you feel you really changed and grew as a person?

DEL RIO: Well, two things happen. It’s obvious that everything is going to be edited. You do 12- to 14-hour days when you’re there. And you know that all of that is not going to make it in the final cut. It is a competition, but it’s also a TV show. So they’re going to use what they feel is worthy. If you cry, it’s going to be used. If you throw a temper tantrum, they’re going to use it.

But also, for me, you’re first there with 14 girls. It’s a bit overwhelming. Everyone has their guard up. Everyone thinks, “Alright, I’m in a room with these bitches, I’ve got to do this.” And as you go along you get to know them. And you get to hear more about their stories, and you become friends with them. So it makes it a little easier to let your guard down. It was more of a journey for myself. I was experiencing, “Wow, I can actually be nice to people, without the fear or rejection or craziness.” It becomes your world for that time that you’re there, so it wasn’t so much as to feel that I’ve changed, it was more like letting your guard down and being a lot more relaxed.