Utah will not be forced to recognize same-sex couples legally married in the state following an order issued by the U.S. Supreme Court Friday.

With the 10th Circuit Court of Appeals temporary stay was set to expire on Monday, Utah officials sought an emergency stay from Supreme Court Justice Sonia Sotomayor. Sotomayor referred the request to the full court, which today issued their stay pending appeal of the case.

The case is separate from one challenging Utah’s same-sex marriage ban, which Utah has appealed to the Supreme Court, and was filed in January by the American Civil Liberties Union on behalf of four same-sex couples who were legally married in Utah before same-sex marriages were brought to halt.

“We are deeply disappointed by the decision to grant a stay pending appeal,” said Joshua Block, a staff attorney with the ACLU Lesbian Gay Bisexual and Transgender Project, in a statment, “but despite this setback, we are confident that when the appellate process is completed we will prevail and these lawfully married same-sex couples will once again be given the same legal protections as ever other legally married Utah couple.” 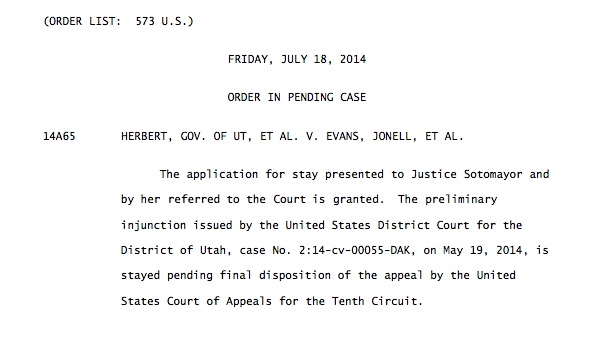