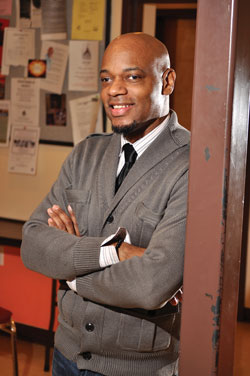 The Wanda Alston Foundation, the local organization that provides services and programs to serve LGBTQ youth and operates the Wanda Alston House, the city’s only housing program solely dedicated to homeless and at-risk LGBTQ youth, announced Tuesday it had received a formal designation from the Internal Revenue Service (IRS) as a 501(c)(3) organization.

The foundation has long sought after achieving this status, which classifies the foundation as a charitable organization, ensures donations received by the foundation are tax-exempt and allows corporations to deduct any contributions they may make. Christopher Dyer, a member of the foundation’s board, said that this also means anyone who made a donation in the 18 months leading up to June – when the status was granted – can receive a deduction for donating to the Wanda Alston Foundation.

Prior to that time, those wishing to receive a deduction for donating to the foundation had to list Casa Ruby, a community center specifically catering to the LGBT and immigrant communities, which served as the fiscal agent and case manager tasked with monitoring and directing the Wanda Alston Foundation’s financial activities, and providing administrative support. Dyer told Metro Weekly that Casa Ruby would remain as the foundation’s fiscal agent for the next few months until the foundation transitions into the role of taking care of its own finances.

According to the IRS, to qualify for 501(c)(3) status, an organization must prove it meets certain criteria: it cannot be an issue or advocacy organization that regularly attempts to influence legislation or support political candidates, and it must be organized and operated for specific charitable causes, and not for the private benefit of an individual or shareholders. As a result of their new tax status, the foundation will also be eligible for certain grants that are only made available to 501(c)(3) organizations.

The designation comes as good news to the foundation, which had encountered a possible hindrance to its achieving 501(c)(3) status after it publicly announced in April that it was putting in place additional controls to prevent misuse of funds after the former executive director allegedly used funds for personal use. At the time, the foundation asked an external accountant to conduct a review of all accounts, with the accountant eventually determining that no government funds had been misused. The foundation’s board members also apologized for the misuse of funds and quickly sought to assuage past and potential donors’ worries and concerns about money management.