Five fast food joints that can be surprisingly healthy

By Brandon Harrison on October 2, 2014 @brandlifts

This morning, I rolled over to turn off my phone’s alarm, just like I do every day. Curiously, it wasn’t making any noise. Then the shock set in — I overslept, and was 35 minutes late for work. Great. Rushed through a shower, threw some questionably clean pants on and out the door. It’s not until I got three-quarters of the way to work that I realized I forgot to grab my grilled chicken and spinach salad for lunch. Not to fret, though — after more than a few of these kinds of mornings, I’ve figured out a few sneaky ways to stay on track with my diet, even with fast food. Here’s a few of them.

McDonald’s — Let’s start things off with a bang. Yes, McDonald’s — the fast food behemoth that has been sued for making our children obese, a place whose entire marketing scheme, from color choices on their menu to the two lane drive-thru, is designed to turn over customers at the speed of light. I should preface this with a cliché phrase, “Where there’s smoke, there’s fire.” Nearly all the items on the menu are absolute garbage. Calorie dense, nutrient light, and crammed with sugar and salt. You’re not going to get a Big Mac or Double Quarter Pounder with Cheese and expect it to help you reach anything other than a bigger pants size. But there are options.

For instance, the McDouble on the dollar menu is cheap and has a pretty solid macro-breakdown, with 18 grams of protein, 17 grams of fat and only 5 grams of carbs. Three of those babies and you’ve got a great lunch for only $3.50. Not too shabby for the ol’ golden arches. More conventional choices of the Grilled Chicken Caesar Salad and Grilled Chicken California Cobb Salad are other protein-packed options. Skip the dressing if you want to keep carbs down, though.

Subway — I have a love/hate relationship with Subway. To understand it, you need to know I loathe marketing and advertising that seems to misrepresent or direct to a conclusion that isn’t always true. Subway has been doing this ever since Jared came on the scene. Jared lost a lot of weight, and good for him, but it wasn’t on the back of eating a Footlong Buffalo Chicken Ranch every day for lunch. No, it was the 3 miles he walked each way to get to Subway, only to eat a 6-inch Turkey and Swiss with no dressing. Subway uses athletes to portray it as healthy — and I believe that was the only reason for their success over Quiznos (who, in my opinion, produce a better sandwich). Back to Subway, though, where you’ll find options that are, in fact, healthy. Common sense prevails here, naturally. Skip the heavy dressings and stick with sweet onion, or vinaigrette. Only get a 6-inch, and opt for no chips. It will save you money and calories. Cheese can be calorie dense as well. If you have to have it, Swiss or American are the best bets. As a somewhat golden rule, usually the lighter the cheese, the easier it is on your waistline. 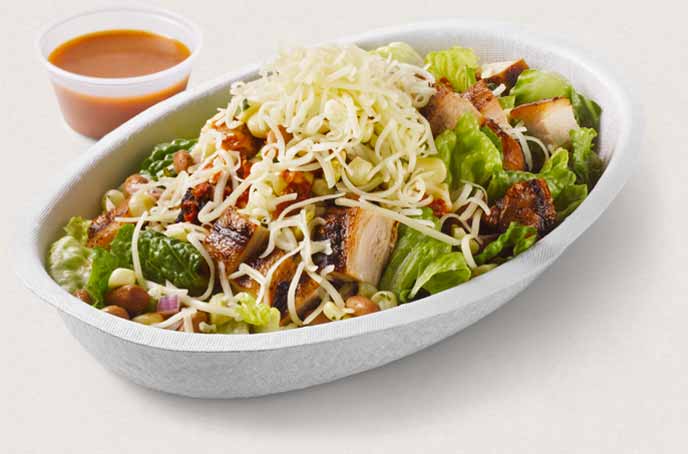 Chipotle — Anyone who has read my articles on fast food knows that I treat Chipotle like the holy grail of healthy fast food chains. And for good reason. This place has it all: grilled vegetables, chicken and steak, rice and beans, glorious guacamole. There’s no reason you can’t walk into a Chipotle and walk out feeling like a million bucks — for only $8. I always get a salad or bowl (salad just means they put the lettuce on the bottom instead of the top), double chicken, fajita veggies, and black beans, topped off with a bit of cheese and roasted tomato salsa. Might be a bit of the Tex-Mex in me, but Chipotle has just the right amount of kick to make even fast food enjoyable.

Jack in the Box — The forgotten burger chain, more famous for their mascot than their food, and the proponents of the heart attack-inducing “Midnight Munchies.” Their tacos are famous for being translucent, due to the amount of grease that goes into the shells when they’re fried. Gross, right? I agree. But — and there’s always a but — they have one saving grace. It’s the only thing on the menu I’ll touch: grilled chicken strips. Two hundred fifty calories and pushing 35 to 38 grams of protein is no joke. They’re pretty darn tasty, too. Not as nice on the wallet, though, and that definitely docks it points — but it’s a good option in a pinch. Seriously though, avoid the other stuff, it’s not worth it.

KFC — Have you ever heard of the KFC Double Down? It’s a chicken sandwich with bacon and cheese. What’s so special about that? Well, instead of a normal bun, it’s sandwiched between two more crispy chicken patties. Sorcery, I say. This thing packs a serious protein punch. Unheralded in the world of fast food, 52 grams of pure muscle-building, awesome protein. Now, it comes at a cost — a big cost, of 660 calories thanks to the fat included in all that wonderful tastiness. If you need something a bit more on the conservative side, KFC always has a nice line-up of grilled chicken breasts and thighs. They’re not as exciting, but they’ll make the cut if you’re strapped for choice.

Suspect allegedly made anti-gay remarks while assaulting two 19-year-olds, then turned on a woman who tried to intervene.

New York City Police are searching for a man who allegedly punched two teenagers in the face on the New York City subway before turning his rage on a woman who tried to intervene in the anti-gay attack.

The incident took place on Saturday, July 31, on the Queens-bound E train, around 3:30 a.m. when a man approached two 19-year-old victims and began making anti-gay statements and derogatory comments about them. He then punched one teen in the face multiple times, and, as the train pulled into Court Square station, began punching the second victim in the face.

A 32-year-old woman acting as a Good Samaritan tried to intervene on the teen's behalf, but was sucker-punched by the man as the train took off. All three victims then exited the train at the Queens Plaza subway station, while the suspect remained on the train, reports the Sunnyside Post.