By John Riley on October 3, 2014 @JohnAndresRiley 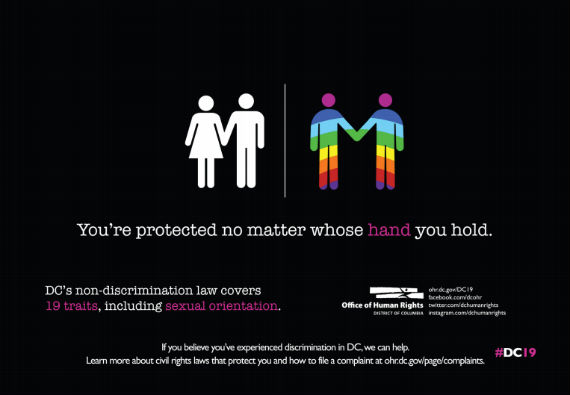 The D.C. Office of Human Rights (OHR) on Monday launched the #DC19 campaign, designed to inform District residents of their rights under the city’s nondiscrimination law, and the traits — ranging from race to sex to sexual orientation and gender identity — that are protected from discrimination in employment, housing or public accommodations.

Eight different posters for the campaign will appear in 14 different Metro stations during the month of October, which also marks LGBT History Month. The posters include icons and simple messages to quickly convey nondiscrimination protections to commuters. Two of those posters directly deal with sexual orientation, one showcasing a lesbian couple and another a gay male couple. The other traits featured on Metro posters are disability, age, color, national origin, religion and gender. Advertisements featuring the additional 12 traits will be released via OHR’s social media throughout the rest of the month. The full campaign can be found online at ohr.dc.gov/DC19. 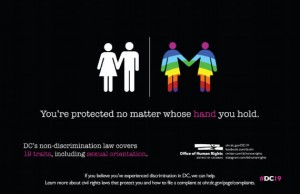 The campaign also seeks to inform the public about their right to file a complaint against any suspected form of discrimination. Complaints are investigated by OHR at no cost, meaning that anyone who believes they have been unfairly treated for a trait covered by the nondiscrimination law can seek recourse.

“Residents and visitors to the District are extremely fortunate to be protected by one of the most progressive anti-discrimination laws in the nation,” Mónica Palacio, the director of OHR, said in a statement. “Our new #DC19 campaign aims to inform and remind people that discrimination based on traits related to physical appearance and other identities is not tolerated in the District, and that individuals can file complaints with the Office of Human Rights when discrimination occurs.”

People who seek to file complaints against suspected discrimination can file those complaints online at ohr.dc.gov/page/complaints, or in person at the OHR office, at 441 4th St. NW, Suite 570N.

A gay Missouri teacher who says district officials reprimanded him for pushing a "personal agenda on sexuality" for putting up an LGBTQ Pride flag in his classroom has resigned.

In a Twitter thread, Wallis, who grew up in Neosho and attended the school he was teaching at, explained that he had hung a Pride flag in his classroom, along with a sign that read, "In this classroom EVERYONE is welcome," in the hope that students, especially LGBTQ youth, would know they had a teacher they could come to for help -- something he didn't have growing up.