By John Riley on November 21, 2014 @JohnAndresRiley 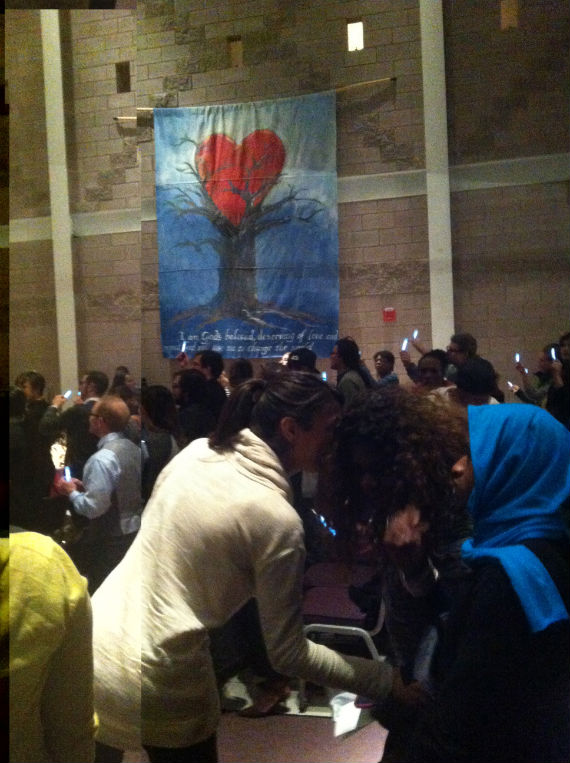 Attendees at the Transgender Day of Remembrance memorial service hold glowsticks in lieu of candles as they commemorate deceased transgender individuals whose lives were cut short by violence.

More than a hundred people packed the Metropolitan Community Church of D.C. to the brim Thursday evening as part of the annual Transgender Day of Remembrance, which memorializes those transgender individuals across the world whose lives were lost to anti-trans violence, calling for solidarity with transgender women of color who are most often the victims of such violence and pledging support for pro-LGBT government policies and nonprofits that support vulnerable communities.

The biggest surprise of the night came near the end of the service when June Crenshaw, a local lesbian activist and member of the Human Rights Campaign’s (HRC) board of governors, announced that HRC would donate $10,000 to the local multicultural LGBT drop-in center Casa Ruby, which was preliminarily approved on Tuesday for a grant through the D.C. Department of Human Services, managed by the Partnership for the Prevention of Homelessness, to operate a transitional home for 10-12 LGBT homeless youth.

Ruby Corado, the founder and executive director of Casa Ruby, was brought to tears by the announcement. Afterwards, she told Metro Weekly that HRC had approached her organization a year ago to see what it could do to help. Thursday’s donation builds upon a previous $5,000 contribution by HRC to help with the community center’s general operating expenses.

“I feel they’re keeping true to their word,” Corado said of HRC. “Especially at a time when LGBT youth homelessness is critical, them stepping forward to support LGBT homelessness is keeping up with the work for our community.”

The annual memorial service has long been a chance for the District’s LGBT community, and specifically, its transgender members, to express the wide range of emotions, from anger to sadness to the determination to persevere in the face of adversity, that are associated with the loss of friends whose lives were cut short by violence. Near the altar stood an easel bearing a collage of the pictures of the deceased from previous years, including Tyra Hunter, who was denied medical care after paramedics realized she was transgender; Nana Boo Mack, who was stabbed across the street from the former office of Transgender Health Empowerment; Lashai McLean, gunned down in the District’s East Corner; Stephanie Thomas and Ukea Davis, killed inside their car in Southeast D.C.; and Deoni Jones, stabbed in the face while waiting at a bus stop in the city’s Benning Heights neighborhood.

The memorial also featured a few “firsts” — namely, the attendance of some of the guest speakers, including MPD Chief Cathy Lanier, D.C. Councilmember David Grosso (I-At-Large) and Councilmember and Mayor-elect Muriel Bowser (D-Ward 4). Outgoing Mayor Vincent Gray (D) also attended for the fourth year in a row, in what will likely be his last appearance as an elected official. Grosso read aloud a resolution by the D.C. Council commemorating the Day of Remembrance, Gray issued a proclamation saying the same, and Randy Kier, of Helping Individual People Survive (HIPS), Inc. read aloud a letter from President Barack Obama recognizing the importance of the Day of Remembrance.

“What we’re really doing is bringing dignity and respect,” Gray said in his speech. “It is creating an opportunity for everyone who lives in the city. People should not be disadvantaged by their sexual orientation, by the geography of where they live, by their [gender] identity, or by any other insignificant way of determining who people are.”

Bowser, who defeated Gray in the Democratic primary for mayor in April, was magnanimous in her speech, acknowledging Gray’s commitment to the LGBT community by telling those assembled that Gray had “set an excellent example of how residents of the District of Columbia should promote and treat everyone equally and fairly, but more than that, to make sure that the institutions of our government, our regulations and policies reflect our values in the District of Columbia.”

“I want to thank all of you for your support, love, guidance, and what I know will be four years of accountability,” Bowser said. “I look forward to that accountability…I am so appreciative of people coming to me to educate me, to make sure I’m where I’m supposed to be, and make sure we’re following the policies that will make us a better city.”

In her speech, Lanier acknowledged the “ups and downs” of her department’s relationship with the District’s transgender community, which has ranged from productive to strained at various points over the years since she was named police chief by former Mayor Adrian Fenty. But Lanier also promised that her department would always be welcoming to the LGBT community and urged people to be willing to file complaints when police behave inappropriately or exhibit conduct unbecoming of an officer.

“Memorial services and anniversaries and history matters,” Lanier said, noting that MPD would be marking the anniversary of the slaying of three police officers with the department’s cold case unit the following day. Tying the Day of Remembrance to the anniversary of the cold case unit killings, she expressed hope that somebody might be able to come forward with information to help close yet unsolved crimes against the transgender community, noting that it is “never too late” to provide information that could potentially help close those cases and get justice for the deceased.

“As the chief of the Metropolitan Police Department, I am proud to stand with transgender men and women, both inside my police department and in our community,  to say that these lives should never have ended,” Lanier said. “They went through their lives, as everybody should be free to do, free to express who they are, anytime, anywhere, regardless of profession, regardless of neighborhood, regardless of age.”