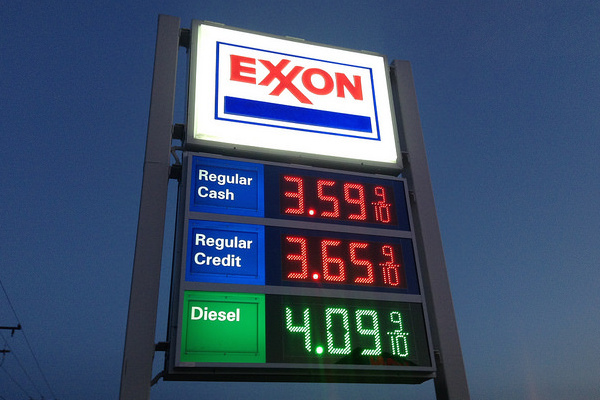 ExxonMobil has quietly adopted LGBT workplace protections in the wake of President Barack Obama’s executive order prohibiting federal contractors from discrimination on the basis of sexual ordination or gender identity.

According to ExxonMobil’s recently released standards of business conduct, it is now the policy of the company to provide equal employment opportunity to LGBT people. 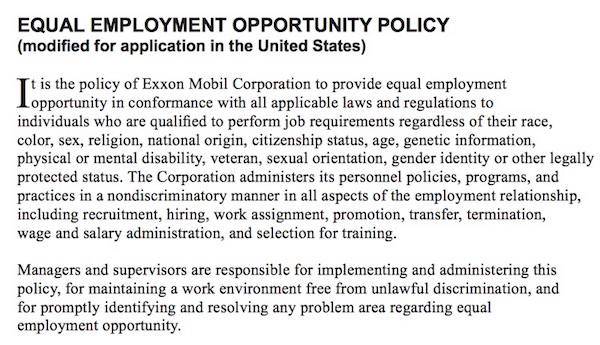 The reversal in policy comes after ExxonMobil shareholders have voted year after year to reject adopting LGBT workplace protections. But now, with Obama’s executive order set to go into effect later this year, ExxonMobil is falling in line with federal law. For those reasons, LGBT-rights advocates saw the company deserves little credit for finally adopting inclusive workplace policies.

“This wasn’t prompted by a change of principles or corporate values, it represents Exxon’s response to President Obama’s July 2014 executive order that prohibits federal contractors from discriminating against LGBT people,” said Deena Fidas, director of the Human Rights Campaign’s Workplace Equality Program, in a statement. “Exxon had to include these explicit workplace protections or risk losing its federal contracts.”

“Exxon’s management deserves little credit for finally adopting the LGBT fairness policies they have rejected year after year for almost two decades, but this is an important victory for the company’s current LGBT employees and future LGBT job applicants,” added Tico Almeida, founder and president of Freedom to Work, in a statement. “It’s obvious Exxon is making these changes now because of mounting legal pressure and the impending risk of losing hundreds of millions of dollars in federal contracts thanks to President Obama’s executive order.”

In July, Obama signed Executive Order 13672 prohibiting contractors who do work with the federal government from discrimination on the basis of sexual orientation and gender identity, a move long sought by advocates. In December, the Labor Department released the final rule implementing Obama’s executive order, set to take effect 120 days after its posting.

Almeida’s Freedom to Work has filed a complaint against ExxonMobil alleging the company discriminated against job applicants who were LGBT. “We will continue prosecuting our civil rights lawsuit against Exxon in Illinois because the corporation should be held accountable for its discriminatory actions from the recent past,” Almeida said. “We will also remain vigilant and file new cases, including under the Obama executive order, based on any new evidence of discrimination that we find at Exxon.”

ExxonMobil is one of the federal government’s top 100 contractors. However, the company has repeatedly held the lowest ranking on HRC’s Corporate Equality Index — the first and only company to receive a negative score.

“Exxon has a long, established history of anti-LGBT stances,” said Fidas. “To articulate its policy through the lens of legal conformance is not an affirmative changing of course and full adoption of equality, but instead a calibrated response to retain government contracts.”