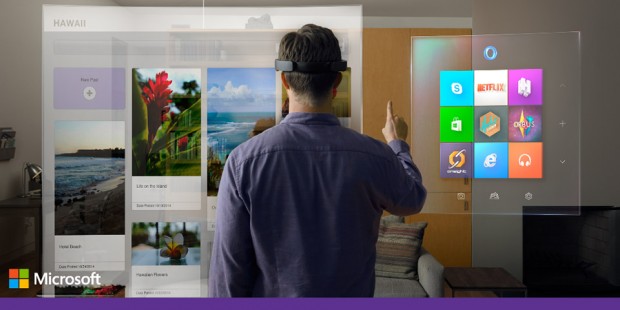 “What if we could take technology and bring it into our world?”

That was the question Microsoft pondered to open its presentation of the HoloLens, the tech giant’s surprising foray into the world of virtual reality. But this isn’t the vision-obscuring virtual reality we’ve seen from Oculus and Samsung. Instead, Microsoft is blending that 3D tech with the vision-overlay system used in devices like Google’s Glass headset, all driven through a headset it’s calling the HoloLens.

Microsoft’s goal is to bring Windows 10‘s universal apps into our world. “We’re dreaming about holograms mixed in your world. Welcome to a new era of Windows.” Confused? Don’t be. Essentially, the headset uses “the most advanced holographic computer the world has ever seen” to project apps, programs, 3D objects, menus and multimedia into your environment, be that at home or in the office. Potential applications are numerous: gamers could turn their entire living room into a level to explore, Netflix could be streamed across an entire blank wall to mimic a movie theatre, designers could explore their creations in 3D, architects could walk through a building while looking at their plans projected onto the space, or, as Microsoft proudly demoed, NASA engineers walking around a virtual recreation of the Curiosity Rover on the Martian landscape. Indeed, NASA’s Jet Propulsion Laboratory has been experimenting with HoloLens, and plans to use it to manoeuvre the Rover and engage in detailed exploration of Mars in a way they can’t do with just images and data.

It all sounded a little too good to be true, until Microsoft brought an employee out on stage to offer a live demo. And, surprisingly, it worked exactly as advertised. The graphics weren’t quite as glossy as in the CGI product video, but using the so-called HoloStudio, the employee constructed and manipulated a quadcopter using air gestures and voice commands such as “glue” and “mirror,” all while the menu and model floated in front of her. It was mightily impressive — and Microsoft brought out a model constructed earlier using the software which had then been 3D-printed — and, of course, it was able to fly. No blue screens of death when holograms are involved.

There’s no pricing or availability to speak of, and we’re not sure the technology is even ready for release, but the hardware itself — which, amazingly, doesn’t require a PC or smartphone connected to it — looked polished and complete. Hurry up and bring this to market please, Microsoft.

Rhuaridh Marr is Metro Weekly's online editor. He can be reached at rmarr@metroweekly.com.
← Previous Story Surface Hub: Microsoft’s giant screen will make meetings less tedious
Next Story → Specs Appeal: Why the 6 Plus took my iPhone virginity