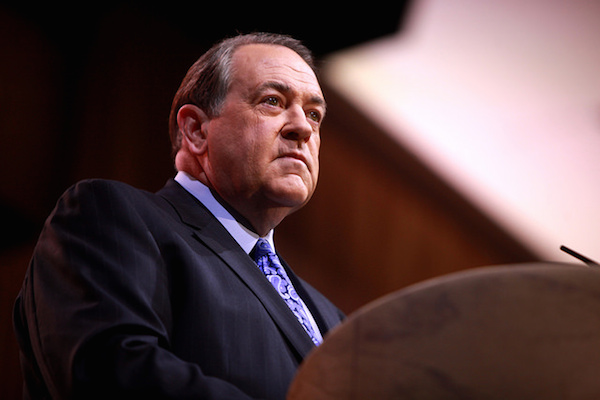 With the U.S Supreme Court set to rule this year on same-sex couples’ right to marry nationwide, Mike Huckabee is digging in his heels when it comes to opposing marriage equality.

“I may be lonely, I may be the only one, but I’m going to stand absolutely faithful to the issue of marriage — not because it’s a politically expedient thing to do, because it isn’t. I’m going to do it because I believe it is the right position, it’s the Biblical position, it’s the historical position,” the former Arkansas governor said in a Tuesday interview with Hugh Hewitt.

Last year, an exasperated Huckabee vowed to leave the party if GOP leadership didn’t take a stand against same-sex marriage. “If the Republicans wanna lose guys like me, and a whole bunch of still God-fearing Bible-believing people, go ahead and just abdicate on this issue. And while you’re at it go ahead and say abortion doesn’t matter either,” Huckabee warned on an American Family Association program. “Because at that point, you lose me, I’m gone. I’ll become an independent. I’ll start finding people that have guts to stand. I’m tired of this.”

In his interview Tuesday, Huckabee backpedalled on those statements and said he was speaking “somewhat rhetorically.” What he didn’t backpedal on, however, was insisting that federal courts alone do not have the authority to legalize same-sex marriage.

“One thing I am angry about…is this notion of judicial supremacy, where if the courts make a decision, I hear governors and even some aspirants to the presidency say well, that’s settled, and it’s the law of the land,” Huckabee said. “No, it isn’t the law of the land. Constitutionally, the courts cannot make a law. They can interpret one. And then the legislature has to create enabling legislation, and the executive has to sign it, and has to enforce it.”

According to Huckabee, if the Supreme Court were to rule in June that the 14th Amendment to the U.S. Constitution prohibits states from banning same-sex marriage, state legislatures and governors would need to approve legislation essentially recognizing that ruling. If they don’t and if federal courts then order states to recognize same-sex marriage, “then you have a confrontation.”

The argument from Huckabee that states could essentially ignore a ruling from the Supreme Court is articulated in his new book, Gods, Guns, Grits, and Gravy. In it, Huckabee writes that the practice of “judicial supremacy” is the equivalent of a coup d’état: “If same-sex marriage is mandated by the courts, instead of by laws passed in the duly authorized legislature and signed and carried out by the executive branch, then the courts have trampled on the Constitution.”

Huckabee has run for president before, going so far as to win the Iowa caucuses in 2008. And it looks like he will run again. On Tuesday, he said his decision to end his Fox News program earlier this month after six years is “pretty indicative of where this is headed.” But with the 2016 Republican presidential race shaping up to be crowded with a number of well-known names, Huckabee is clearly positioning himself as the culture warrior candidate. And if his recent statements are any indication, he hopes to garner the support of social conservatives who might otherwise be attracted to the likes of Sen. Ted Cruz (Texas), Gov. Bobby Jindal (La.) or former Sen. Rick Santorum (Penn.).

Should the Supreme Court rule later this year that state bans are unconstitutional, it may come as a relief to a number of Republicans who simply want to stop talking about this issue, particularly as polling shows young voters overwhelmingly support marriage equality. Former Gov. Jeb Bush might be one of those Republicans based on what little interest he showed in pushing back against same-sex marriage in Florida. Following a federal court decision overturning the state’s marriage ban, Bush did not urge same-sex marriage opponents to continue to fight the issue, but to “respect the rule of law.”

Huckabee, however, has shown no signs letting go of the issue so easily. In his book he writes, “Should there come a day in which the people of America vote to establish new versions of marriage — with their direct vote or through their elected representatives — those who oppose this change will face a choice: to either accept it, ignore it, or rebel against it. If a single judge can rebel against the people’s law, has he not encouraged others to do the same?”

He may be lonely and he may be the only one, but Huckabee appears poised to lead that rebellion.