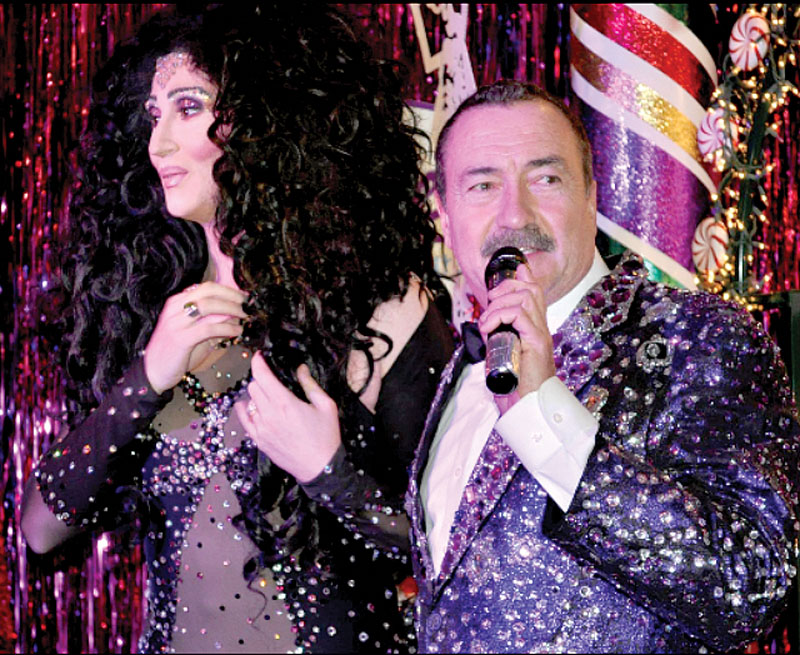 Freddie Lutz says he doesn’t usually get Yelp comments like that, which came from a woman in New York. “Most people get it. It’s a little tongue-in-cheek, the decorating in here,” Lutz says, referring to his namesake bar in Arlington. Naturally, he was amused by her distaste. “I just Yelped her back and said, ‘Well, if you think it’s overdone now, you should come back for Christmas.'”

Or, for that matter, the annual anniversary Purple Party. This weekend’s event at Freddie’s Beach Bar will feature a whole lot of drag and karaoke, and kicks off a full month of festiveness. “We’ll have purple party favors and purple drink specials…. We’re over-decorating in purple for the month.”

If that doesn’t sound a whole lot different than any other month at Freddie’s, that’s because ultimately it isn’t. Pretty much every day feels like a holiday worth celebrating when you’re at Freddie’s — and the over-the-top kitschy décor makes it silly, but also, somehow, special.

This weekend, however, is extra special. It was 15 years ago this month that Lutz quit his venerable job as host at the popular restaurant Café Italia and opened his own gay bar and grill on the same street. In the process, he ended up creating an institution, one that would go on to become Northern Virginia’s longest-lasting gay bar — also its only one, for now — and home to the suburbs’ longest-lasting drag show, the Saturday night Freddie’s Follies. Ask Lutz if he thought the business might last this long, and he quips, “I didn’t think I’d be 64, either. Time flies.”

Time has a lot to do with it. “I think if I had opened 10 years earlier, it would have been a little more difficult.” As it was, Freddie’s benefited from the diversity training that officers with the Arlington County Police Department were undertaking when the bar opened. Of course over the years the bar has also benefited from what Lutz calls his “terrific staff” and a leadership team that includes Lutz’s “tremendously helpful right-hand man,” manager Russ Colbourne, and his “wonderful chef Francis Cruz, who has been with me forever.”

Both Lutz and the bar have also been positively impacted by progressive “surprises” over the past decade — from the eventual statewide smoking ban in restaurants and bars (a big surprise for a commonwealth essentially built on tobacco), to last year’s recognition of marriage equality. “Do you want to get married tomorrow?” Lutz remembers asking his fiancé and partner of 17 years, Johnny Cervantes, the night the state started performing same-sex marriages. “No, but you can take me to Tiffany’s,” Cervantes teased.

But it was the 2011 repeal of “Don’t Ask, Don’t Tell” that probably had the largest impact. “That was one of our biggest nights in here. We were just packed and Channel 5 came over. It was a big deal.” Military personnel make up a sizable chunk of Freddie’s clientele, especially during the bar’s popular Pentagon Happy Hour, held the third Thursday of each month.

The military is certainly near and dear to Lutz. “My dad was a colonel in the Army — both my parents are buried at Arlington Cemetery. I think he would be very, actually, proud of what I’ve done here, especially with our relationship with the Pentagon. I think he’d think that was pretty cool.”