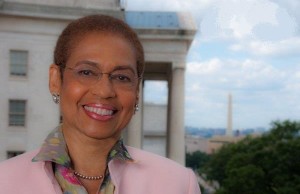 A press conference of liberal-leaning advocacy groups was convened on Thursday by Del. Eleanor Holmes Norton (D-DC). The coalition is opposing attempts by Congress to reverse or hinder the implementation of several recently enacted D.C. laws.

Every year, as part of the appropriations process for the upcoming fiscal year, the District must have its budget approved by Congress. Often, particularly in election years, members of Congress hoping to shore themselves up against any electoral challenges seek to impose congressional riders that prohibit the District from spending money, even local funds raised from D.C. taxes, on certain initiatives. Often, the riders are used to pass controversial provisions that would likely not be approved by the Congress in a stand-alone bill.

This year, specifically, conservatives in Congress have taken aim at the District’s recent voter-approved referendum legalizing small amounts of marijuana for personal use; D.C. gun control measures, such as universal background checks; a recent District law prohibiting employers from discriminating against people because of their reproductive health decisions, such as the use of birth control or the decision to have a child via in vitro fertilization or artificial insemination; the District’s needle-exchange program aimed at reducing HIV rates among intravenous drug users; and an LGBT-focused law that prohibits educational institutions, even those that are religiously affiliated, from discriminating against LGBT individuals or student groups.

“Today, we issue a warning to members of the House who oppose the District’s right to democratic local self-government by trying to overturn our local laws: I will force roll call votes on each and every ride targeting D.C. laws,” Norton said. “There will be no hiding from those back home for members who infringe on the democratic rights of our local citizens.” 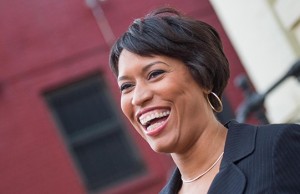 In her remarks, Bowser also decried the yearly threat of congressional riders.

“Every year, during this appropriations season, as it heats up, we are reminded that we lack the rights that Americans in all 50 states enjoy,” she said. “…We have no vote in this House. …Today, as the congresswoman noted, we are highlighting the threats that we perceive that affect the choices of Washingtonians.”

Bowser said that members of Congress have far more pressing issues to consider rather than grandstanding over laws passed by a “duly-elected Mayor and a duly-elected Council.” She also said that members of Congress were elected to advocate on behalf of their own constituents, not meddling in the District’s affairs. At one point, she even used, as an example, Maryland’s 1st Congressional District, whose elected congressman, Rep. Andy Harris (R) has been among the most vocal in opposition to the District’s legalization of marijuana.

The two issues receiving the most press, and the ones most likely to face a congressional rider trying to prohibit the District from using funds to implement both laws, are the Council approved Reproductive Health Non-Discrimination Amendment Act (RHNDAA) and Human Rights Amendment Act (HRAA), which deal with, respectively, the issue of women’s reproductive choice and LGBT rights. Both pieces came under attack from Congress, with Republican House and Senate members introducing resolutions of disapproval in a feeble attempt to stop the laws from going into effect. But the House voted to pass the resolution disapproving of RHNDAA with less than 48 hours before the law went into effect on May 2, and failed to even mark up legislation aimed at overturning the HRAA.

Still, the representatives from the advocacy organizations, which are a small subset of a much larger coalition opposing any congressional riders to the D.C. appropriations bill, advised supporters of the pro-choice, gun control, drug reform and LGBT rights movements to remain vigilant against any attempt to undermine the District’s laws.

“The D.C. Council has defended the rights of its residents, and its LGBT residents for a long time,” said David Stacy, government affairs director for HRC. “The citizens of D.C. strongly support these rights. And these rights are applied equally and constitutionally in the District of Columbia. …But time and time again, Congress has treated the LGBT citizens of the District as second-class citizens. And in 1988, the Armstrong Amendment was adopted by the Congress to block the D.C. Human Rights Act from applying equally to religious educational institutions. Fortunately, the Council has decided to repeal that act, and, at this point, we hope the Congress will not issue a rider to reinstate the Armstrong Amendment.”

Stacy also said that, contrary to conservative critiques of the legislation, that the repeal of the Armstrong Amendment does not require religious educational institutions to officially recognize groups such as an LGBT students group whose mission might be perceived as contrary to the founding principles of the institution. Nor, he added, does the requirement that schools treat such groups in the same manner as it does other student groups, imply that the institution is somehow indirectly endorsing the group.

Similarly, Norton sought to clarify what the District’s RHNDAA law actually does, accusing conservatives of misrepresenting the bill’s contents. The law, as written, Norton said, allows organizations or employers to ask, when hiring, if potential employees will adhere to and carry out the organization’s beliefs or mission statement, and also allows employers to fire employees who are unwilling or unable to meet those demands. What it does do, she said, is prevents employers from intruding upon employee’s personal medical decisions and prevent them from firing or refusing to hire people due to their personal reproductive choices.

Norton also thanked House Democratic leadership for standing relatively united in opposition to attempts to interfere in District affairs. Indeed, only three Democrats, all pro-life and all known for being Democrats who have previously attacked fellow Democrats to curry favor with conservative voters or interest groups, voted in favor of the RHNDAA disapproval resolution, while 13 Republicans from the Northeast or swing districts crossed party lines to oppose the resolution.

“What we need most now are the efforts of the tireless, dedicated and united coalition of local and national organizations that has joined us in our struggle for our rights as a local jurisdiction to pass laws of our own choosing without interference from members of the House and Senate, who are unaccountable through the democratic process to the residents of the District of Columbia,” Norton said.

John Riley is the local news reporter for Metro Weekly. He can be reached at jriley@metroweekly.com
← Previous Story Whitman-Walker Health to debut new building on 14th Street
Next Story → Fairfax County School Board adds gender identity to nondiscrimination policy