A look back at the first 13 Official Pride Guide Covers 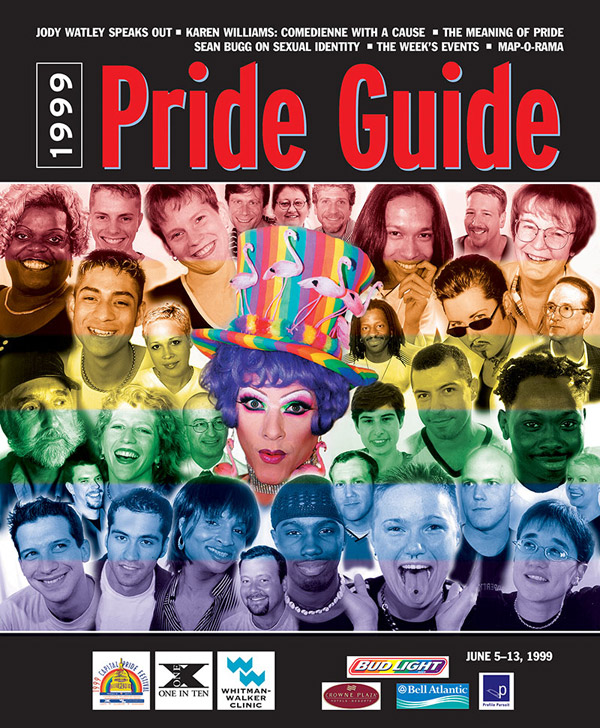 In early 1999, we got a call from Jose Ucles, then the director of the newly-rechristened Capital Pride.

“Do you want to create a Pride Guide for us?” Jose asked, in his deep, silken husk of a voice. It didn’t take long — a split second? — to respond in the affirmative. Our goal would be to create something the festival had never seen before — a substantial and substantive magazine that would help Pride grow, help it deepen its ties with the community, help sponsors and advertisers connect with Pride-goers, and most importantly, help market the festival in a way that it had never been promoted before.

The first Pride Guide was a triumphant 148 pages and featured the first glossy wrap we had ever attempted. We put 40,000 guides on the street and down at the festival. Todd Franson — then our senior photographer, now our longest-serving art director — laboriously, lovingly crafted a cover out of portraits of the community, shot in a single, long session at Badlands. Mike Heffner, Metro Weekly‘s art director at the time, assembled what would soon become an iconic mainstay of Capital Pride.

In all, Metro Weekly produced 13 Pride Guides, utilizing our staff and contributors, many of whom pulled double duty on both the Guide and the weekly magazine (and for several years, triple duty, as we also produced the Black Pride Guide for 11 years). It was always a labor of love for us, a creative endeavour we took great pride in. And it attached us to the event in a profoundly personal, meaningful way. It made us feel like we were not just covering Pride, but that we were an essential part of it.

When the Capital Pride Alliance took on the event in 2009, we took the publication from newsprint to full glossy, thanks to the encouragement and efforts of Tony Frye, who art directed seven of the 13 guides. The final year we produced the Guide, in 2011, we embarked on perhaps the most ambitious cover since that first year in 1999. It consisted of a Julian Vankim photo shoot featuring 15 diverse members of the community, who graciously spent a long Saturday afternoon at Town Danceboutique. The concept was too big for one cover. So we had it span four.

On the 40th Anniversary of Pride, we wanted to share with you a look back at those 13 Pride Guide covers. We hope seeing them again after all these years gives you the same joyous flashback as it did us.

Scroll to the bottom of the post, click on images to enlarge and then use the arrows on the side to scroll through them.