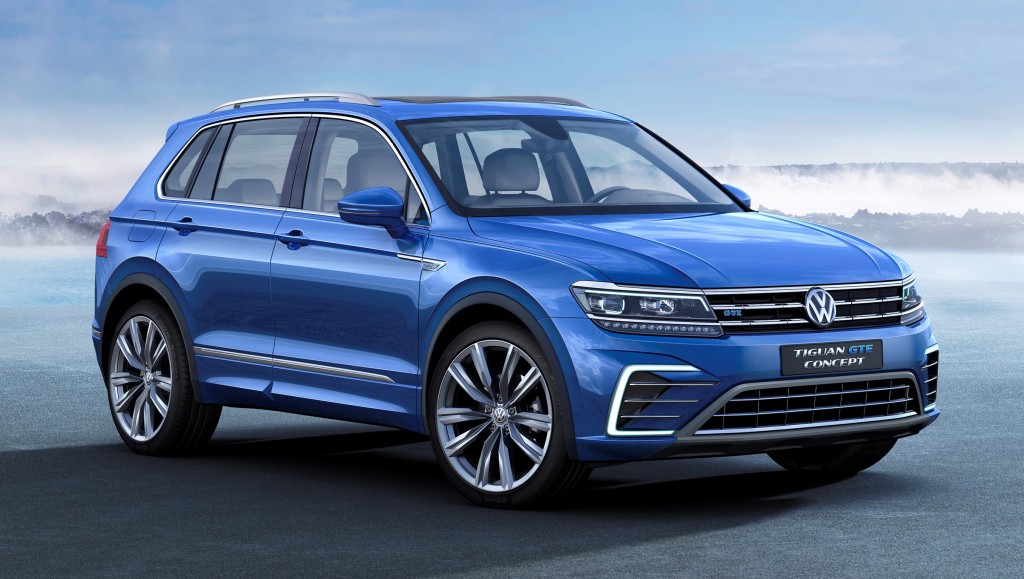 “We are in the process of reinventing Europe’s largest automaker, laying the technological, economic and structural foundations,” Martin Winterkorn, VW’s CEO, told the audience at the brand’s glitzy Frankfurt media show. “Technological leadership is no longer solely defined in terms of horsepower and torque,” he continued. “We are taking the precision, enduring value and quality of our cars into the new, digital world.”

Winterkorn set out a series of initiatives aimed at making Volkswagen one of the world’s leading manufacturer’s of green vehicles. By 2020, the German brand — which includes Audi, Porsche, Bentley and others — will have 20 more electric or plug-in hybrid cars available to consumers. Volkswagen wants to have the largest electric and connected fleet of vehicles on the road. In short? It’s a bold, new, electric-powered frontier, and Volkswagen wants to lead the charge (pun intended).

It was a strategy galvanized by several enticing products on display in Frankfurt, Germany. VW consumed an entire hall to showcase its wares, which ranged from sports concepts to humdrum compacts, but buried among mainstream models were several glimpses at a more efficient, more raucous Volkswagen.

Porsche arguably stole most of the spotlight — and not just for VW’s autos, but the show as a whole. The German sportscar manufacturer rolled out their Mission E Concept, which has Tesla’s all-electric Model S sedan squarely in its sights. The electric-only sports sedan boasts a 311-mile range, 590 horsepower, instant torque (something all electric cars enjoy) and can hit 60 mph in “under 3.5 seconds.” Need to reach 120? It’ll breeze past it in less than 12 seconds from standstill. It’s not just fast in a straight line, either. Porsche has developed an 800-volt charging system that will juice the Mission E to 80-percent in just 15 minutes. Stop at a highway gas station for a coffee and the Porsche will be good for another 249 miles before you’ve drained your cup. 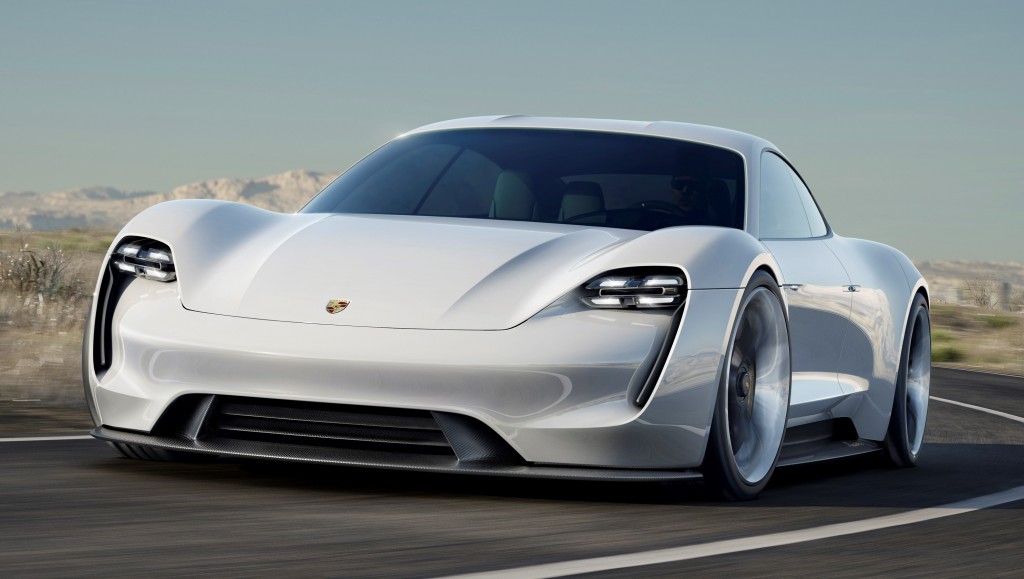 If sedans aren’t your thing, Audi premiered the E-Tron Quattro Concept, a gorgeous, muscular, electric SUV born from the new Q7. Unlike Porsche, Audi will actually make this car — it previews a model debuting in 2018. It’ll also manage 311 miles before needing some electricity, while a boost feature offers a total of 496 horsepower and 590 pound-feet of torque. Zero-to-sixty? Dispatched in 4.6 seconds. With a maximum strength charger, it’ll fill its batteries in just 50 minutes — though the concept also features a solar panel roof that’ll help top things up.

Straying away from pure electric cars, the Golf GTE Sport Concept is a hybrid that certainly isn’t your garden variety Prius. Sure, it’ll manage 31 miles in electric-only mode, but you’ll want to spend every moment with the GTE mode activated — almost 400 horses of gas and electric power will thrusts the GTE Sport to 60 in just over four seconds. Top speed? Over 170 mph. It’s an environmentally-friendly way to put a huge grin on your face.

At the more mundane end of the spectrum, Volkswagen revealed its dynamic new Tiguan crossover, which will reach American shores as a 2017 model. In GTE spec it’ll offer hybrid power, promising plug-in charging, 31 miles of electric range and over 200 horsepower to keep your right foot happy. Solar panels in the roof promise up to 600 miles of charger-free driving per year, which is pretty impressive.

Indeed, Volkswagen seemed heavily committed to a more environmentally-conscious future. Battery-powered and hybrid vehicles are going to become an ever more prevalent sight on our roads, which is why VW — now the world’s largest automaker — is eager to get in early and secure its customer base. “People expect new answers, new solutions and new directions from us,” Winterkorn told the crowd. “At Volkswagen there is a sense that a new era is dawning.”

It was a stunningly brazen statement from a man who, just days later, would become embroiled in one of the biggest scandals to hit the automotive world in recent years.

Last Friday, Volkswagen was told by the Obama administration to recall almost 500,000 vehicles. The reason? The German automaker had illegally altered its cars to circumvent mandatory emissions tests. The Environmental Protection Agency (EPA) announced that certain diesel-powered Volkswagens and Audis had been pumping dangerous amounts of nitrogen oxide into the atmosphere — up to 40 times the federally mandated limit.

EPA tests had confirmed that the vehicles would activate controls when they detected the EPAs testing scenarios, artificially lowering emissions. Under normal driving, such controls were deactivated — owners would gain more power and greater fuel economy, but their cars would be emitting high amounts of nitrogen oxide, widely associated with creating ozone, smog, and contributing to respiratory problems. Cynthia Giles, the EPA’s assistant administrator for the Office of Enforcement and Compliance didn’t mince words in a statement. “We expected better from Volkswagen,” she said, before calling their deactivation of emissions controls “a threat to public health.”

For Volkswagen, the EPA’s findings should be cause for immense concern. Unlike past scandals that have rocked the automotive world, their actions have significantly greater ramifications. Toyota coughed up $1.2 billion in 2013 for cars that would accelerate suddenly without reason, while GM was stung by a $900 million fine for last year’s ignition switch scandal.

They specifically engineered thousands of vehicles to deliberately flout a federal law. Volkswagen’s actions weren’t negligent — they were criminal.

In those instances, however, the automakers covered up information that their products were defective. GM and Toyota tried to mask defects in their products, but they didn’t willingly cause said defects. Volkswagen’s case is dramatically different. They specifically engineered thousands of vehicles to deliberately flout a federal law. Volkswagen’s actions weren’t negligent — they were criminal.

“This is several steps beyond the violations that we’ve seen from other auto companies,” Tyson Slocum, a director at Public Citizen, a consumer advocacy group, told The New York Times. “They appear to have designed a system with the intention to mislead consumers and the government. If that’s proven true, it’s remarkable and outrageous.”

“Our company was dishonest. We have totally screwed up,” said Michael Horn, CEO of Volkswagen Group of America, desperately enacting damage control measures. “We must fix the cars to prevent this from ever happening again and we have to make this right. This kind of behavior is totally inconsistent with our qualities.”

Volkswagen’s apology was a recalcitrant admission from a company facing a massive loss in revenue.

Even more disastrous was the discovery that Volkswagen’s top executives sat on the knowledge that their vehicles were massively overpolluting for months — if not years. According to letters sent to company officials by the EPA, Volkswagen only admitted to using software tricks to cheat the emissions test after regulators threatened to withhold certification for new vehicles — effectively removing them from sale. This was a recalcitrant admission from a company facing a massive loss in revenue.

Now, Volkswagen faces investigations and potential charges from a number of sources. California is carrying out its own investigation in addition to the EPA, while the Justice Department will likely get involved. Unlike General Motors, which was originally hit with a tiny (for GM) fine of just $35 million by the National Highway Traffic Safety Administration, Volkswagen could be prosecuted under the Clean Air Act. That brings a maximum fine of $37,500 per vehicle — a potential total of $18 billion owed to the government. Volkswagen have already stated they are setting aside up to $7.3 billion to cover the recall and other associated costs.

Except that it’s not just 500,000 vehicles. The software used to cheat American regulations exists in up to 11 million vehicles around the world, VW admitted Tuesday. If the American fine were able to be applied globally, Volkswagen would be liable for a maximum penalty of over $400 billion — that’s more than the total market capitalization of Volkswagen, General Motors and Toyota (the world’s three largest automakers) combined.

Mercifully, Volkswagen only has the wrath of the U.S. government to deal with, though European regulators are apparently considering their own investigations.

For Winterkorn, it was an incredibly ironic climbdown from his boasts about efficiency and technology a week prior. “I personally am deeply sorry that we have broken the trust of our customers and the public,” he said in a statement Monday. “We will cooperate fully with the responsible agencies, with transparency and urgency, to clearly, openly, and completely establish all of the facts of this case.”

In a video posted to VW’s website a day later, Winterkorn — whose own position at the company is now in jeopardy — attempted to repair the damage the EPA’s revelations had caused. Stating again that he was “endlessly sorry,” and that “the irregularities with these engines contradict everything for which Volkswagen stands,” Winterkorn desperately tried to save face ahead of a vote by VW’s executive board which could see him taking the fall for the company’s disgrace.

For consumers, though, it may already be too late.

“That’s just a whole other level of not only lying to the government, but also lying to your consumer,” Priya Shah, who owns a 2012 Jetta SportWagen, told the Los Angeles Times. She accused Volkswagen of “blatant disregard” before stating what many Volkswagen customers have iterated on social media — that she won’t be buying a VW again, diesel or otherwise.

“I don’t want to be spewing noxious gases into the environment,” she said. “The diesels — they’ve lost my trust on that.”

Rhuaridh Marr is Metro Weekly's online editor. He can be reached at rmarr@metroweekly.com.
← Previous Story Cars can now be hacked with a text message
Next Story → US to Toyota: Why does ISIS have so many of your trucks?