Pericles is something of a rough sea 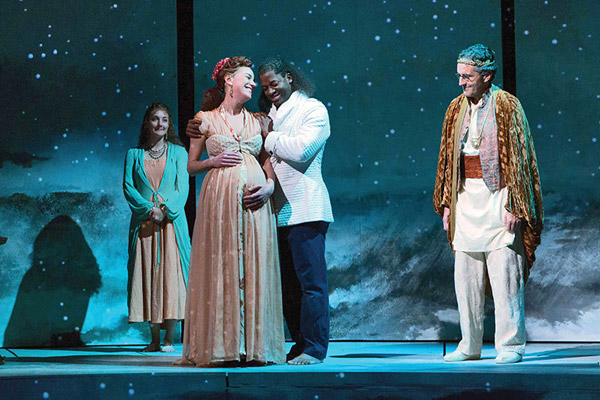 Shakespeare’s Pericles was apparently very popular in its heyday, but it is easy to see why staging it today requires some inventiveness. A rather one-dimensional narrative of the travails of the fictional, seafaring King Pericles, the play falls somewhere between the realistic and the fantastical and, unfortunately, never quite masters either. There are too many sea-voyages and too few explorations of what drives the characters. There may be a mystical aspect that blends well with some passionate romance, but they don’t sit well with the many unexplored characters and an overly earthy rendering of life in a brothel.

Overall, there is just something not-quite-Shakespeare about Pericles (

), despite some beautiful language and a few poignant moments. And it may be due to more than just a rogue wave amid the Bard’s genius — many scholars believe as much as half of the play may have been written by a less-talented collaborator.

As to why the play “spoke” so successfully to its contemporaries is any cultural historian’s guess. For today’s audiences, its accessibility starts with how any given production surmounts its challenges. Here, the Oregon Shakespeare Festival uses music and song to breach the play’s choppy seas, literally and metaphorically. It’s a bold move, but one that, at least intellectually, works well.

The small band of musicians, who reside almost continuously onstage, fit nicely within the confines of the Folger Theatre — an intimate and medievally-styled venue. And John Herrick’s music sets the scene for the production’s fairytale world, beautifully suggested in the use of silks to create stormy waves, paper clouds lit like solar systems, projections of wild waves and schematic star-scapes and costuming reminiscent of Edmund Dulac’s imaginings.

Still, as clever as the musical concept is, it does enter territory that presents problems. Those who enjoy musical theater will, without doubt, find the gentle tunes and songs happily familiar in their range and scope. Indeed the compositions are so accessible they will do much to encourage those unfamiliar with Shakespeare to realize it isn’t all heavy-lifting. For those not so inclined, toes may threaten to curl. Not everyone wants their Shakespeare set to music, and, if it must be, tunes of a more renaissance or baroque bent would add greater mystery and poignancy.

Another problem with these interludes of song is their effect on the dramatic intensity. Anyone used to losing themselves in the pacing of Shakespearean language, along with the pauses and silences in and around the words and the contemplative moments, will find all but the more comedic renderings disruptive. Quite simply, they break the spell.

Of course, this leads to a no-win situation since the music is there to put a positive spin on other shortcomings. Surmounting many of these interpretive tensions is the cast, each of whom embraces the concept with verve and energy.

At the center of the tale is Pericles, and giving a genuine star turn is the remarkable Wayne T. Carr. A powerful presence, Carr is also nuanced, understated and textured. One longs to see him in pure, unadorned Shakespeare. He is utterly at home with the language and completely and convincingly inhabits his man. If his later moments as the aged and hermetic Pericles may tempt a few titters, it is far more about the strangely simple plane on which this play resides, than anything Carr is lacking.

Brooke Parks as Pericles’ wife Thaisa (and also as the ruthless Queen Dionyza) is another standout, bringing so much charm and wit to her princess there is no doubt of the chemistry between her and Pericles. Later, she channels compelling emotion as a woman who has lost her infant, no easy feat in a play that has so little to say about Thaisa once she is married. As Thaisa’s father, Simonides, Scott Ripley is hilarious and does much to give the production the kind of edge that counters the music’s corny tendencies.

Bringing high energy and comedy, U. Jonathan Toppo brings a kind of street-entertainer’s good-natured bluster and bravado to his parts, while Cedric Lamar plays his roles with a compelling irony and intensity. Barzin Akhavan is charismatic as Cleon, even if he chews a bit of scenery, and is quite wonderful as the mystical healer Cerimon.

Walking a fine line is Armando Duran as the narrator Gower. Duran’s characterization — something akin to one’s idea of a storyteller in a Berkley commune — steps right up to the line of hokey without actually, thankfully, stepping over. He does well in providing a charismatic lead and link throughout the narrative. Providing a sweet center to the second half of the play, Jennie Greenberry does a good job as Marina, Pericles’ long-lost daughter, as she navigates life in a brothel and her own identity. Kudos to Micheal J.Hume for capturing his diverse roles with clarity.

Truth be told, Pericles is something of a rough sea. The view from the top of the waves can be wonderful — just be prepared for the troughs.

Also, check for savings on tickets for Pericles.