Too Much Light Makes the Baby Go Blind (Review)

Woolly Mammoth offers another round of boisterous fun and unpredictability

). An interesting format of fast and furious mini-plays that come with the promise that no two performances are ever alike and yet all are based on the player’s real lives, it’s a grand exercise in theatrical flexibility.

More about perspectives and impressions than memories, the technique here dramatically opens up the field and the dimension. As such, part of what intrigues is figuring out the gist of each piece before it’s time to choose another one — one of several noisy processes which (participation alert) involve the audience.

Still, although there is a certain theatrical anarchy here, the proceedings are, without doubt, skillfully orchestrated for speed, rhythm and emotional flow — with a vibe closer to sketch comedy than theatre of the absurd. They may be neo-futuristic, but they are not out to alienate. If a few of the perspectives are a tad edgy, none are in danger of shocking a typical Woolly audience. And preaching to such a choir, it would have been interesting to veer away from the somewhat familiar (and vaguely accusatory) personal perspectives on race and gender and get the content as unhinged as the format. With, for example, some of the Left going so far as to become almost Right, there is plenty of controversy worth exploring in a Too Much Light-style arena. And without more exploration, it’s fair to ask if this is really neo-futurist theater or simply an interestingly chaotic montage of thoughts and impressions. Does it matter? Not really, either way it’s entertainment with some thought-provoking moments and plenty of laughs.

Although the players vary over the run, the current crop offer a certain unpolished innocence that keeps it fresh, if sometimes a tad rough around the edges. Trevor Dawkins makes for an impressive presence and effectively delivers one of the most memorable monologues — an accelerating ode to mortality delivered from a balcony — while Malic White stands out for an irrepressible urge to connect with the audience.

All in, it’s hipsterish hijinks with a heart and a great place to start off your holiday cheer.

Too Much Light Makes the Baby Go Blind runs to January 3 at Woolly Mammoth, 641 D St. NW. Tickets are $48 to $68. A special New Year’s Eve performance includes a pre-show happy hour and 10:30 p.m. performance, followed by a cast party with “tasty treats, unlimited beer and wine, and a champagne toast.” Tickets start at $100. Call 202-393-3939 or visit woollymammoth.net. 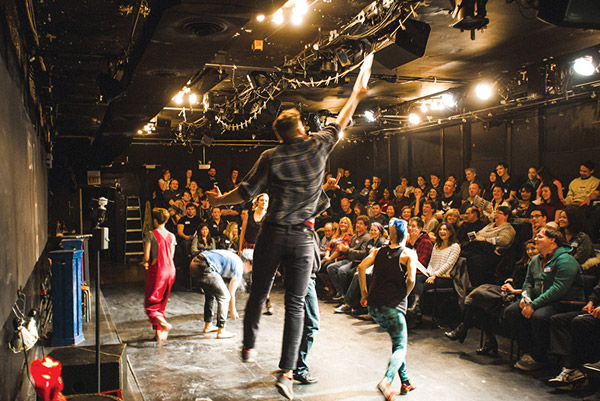