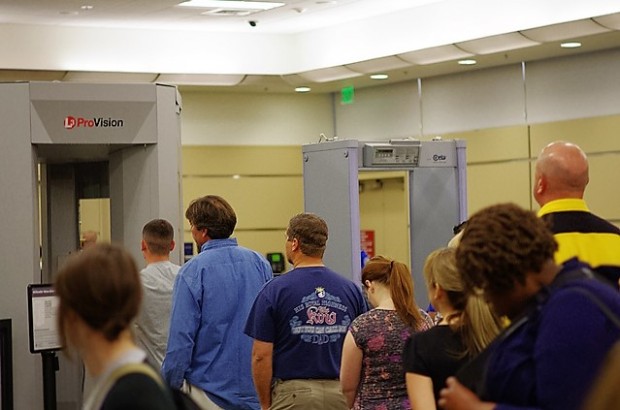 An Australian passenger was left feeling “demeaned” after airport security asked him to remove his prosthetic penis during security checks.

The passenger, who asked to remain anonymous, spoke with the Daily Mail Australia. He alleges that the airport’s full body scanner detected his prosthetic, and he was subsequently asked to remove it.

“I explained to the officer at the scanner that I am trans and that I was wearing a prosthetic,” the man told the Mail, “to which he responded that he would need to get his supervisor. In full view of other travellers, the Supervisor approached me putting rubber gloves on. He seemed more concerned with displaying his authority and making a spectacle out of the situation.

“When I asked him what the gloves were for, he told me that he was going to do a ‘private search,'” he continued.

He was taken into a small room, where a body search was conducted. Before handling his prosthetic, one of the security officers put on a second glove. Asked why, he responded: “You want me to touch that thing with my bare hands?” His attitude left the passenger feeling “incredibly uneasy, and anxious,” and called it “demeaning and unnecessary.”

“I felt that the supervisor had no regard for me as a human being,” he stated, adding that it left him “feeling incredibly degraded and… anxious about travelling.”

The National LGBTI Health Alliance has submitted a complaint on the man’s behalf to an Australian Senate committee inquiry on airport aviation and security. Its findings will be published in May.

A new set of guidelines recently introduced by the TSA could make traveling even more stressful for transgender Americans — something already apparent by the #travelingwhiletrans hashtag on Twitter.

Whereas previously trans people could request a pat-down instead of the full body scanners, changes to TSA rules now mandate that security officials can instead send passengers through the scanners against their requests. It will be decided on a case-by-case basis, “as warranted by security considerations,” according to CBS News.

This could cause issues for transgender passengers, as the TSA official who operates the scanner makes a decision as to whether the passenger is male or female, the Advocate reports. Should a transgender woman still have male genitalia, or a transgender man be wearing a prosthetic, the machines will trigger an alarm — a similar situation to the case of the Australian man detailed above.

Some excerpts from #travelingwhiletrans are below:

Dear @TSA, being a transgender person does not make you a terrorist. #travelingwhiletrans

Glad to know whenever I travel (by plane) I’ll be flagged as an alarm…. #TravelingWhileTrans

#TravelingWhileTrans used to mean my body was an “anomaly” but now it’ll be an “alarm.” Just a new indignity, @TSA. https://t.co/wFaJhEDrzz

#TravelingWhileTrans is a big issue for @TSA but I wonder how many people with gynocomastia have problems with alarms too?

Rhuaridh Marr is Metro Weekly's managing editor. He can be reached at rmarr@metroweekly.com.
← Previous Story ISIS murders 25 men accused of being gay
Next Story → Qatar bans “The Danish Girl” after complaints of “depravity”