Unravel is a beautiful and challenging game, but it’s desperate to be loved and often imperfect 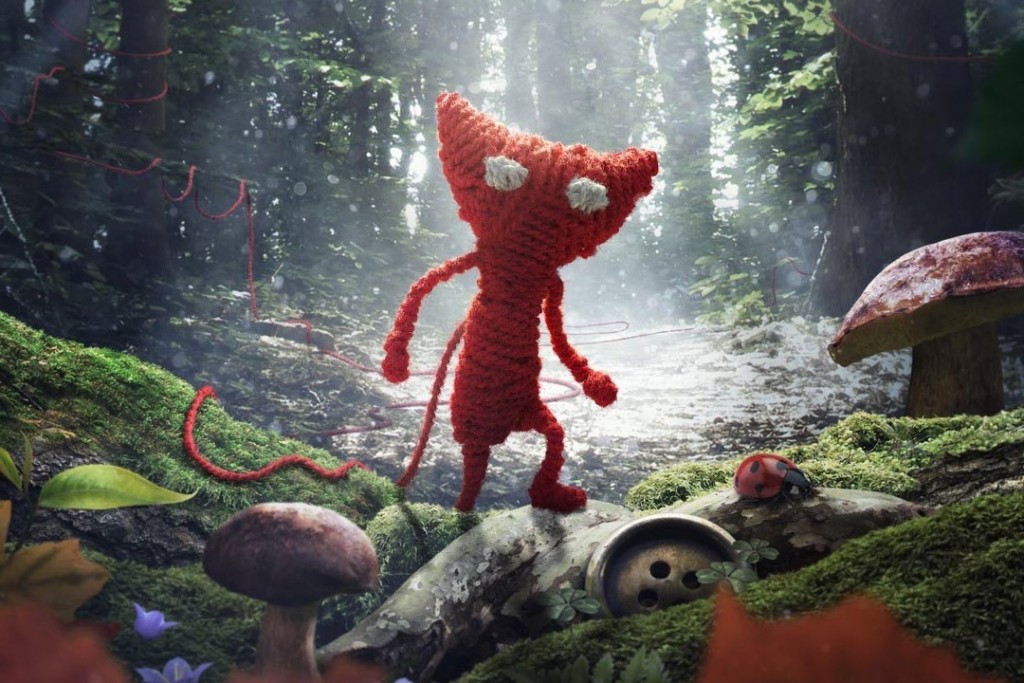 Unravel is desperate to be something different. The beautiful, lovingly-made platformer that wowed audiences at last year’s E3 is finally here, but after charming everyone with its woollen hero and detailed environments, what we actually have is a fairly run-of-the-mill platformer cobbled together from recognizable elements and a greater focus on story over gameplay. Is it a good game? Undoubtedly. Is it something truly unique and exceptional? Not so much.

That said, you’ll be hard pressed not to fall a little bit in love with Unravel (}}} and a half). It helps that its protagonist, Yarny, is so utterly lovable. Ready made to be turned into a plush toy to delight younger players (and, heck, this older player), Yarny is formed entirely from red wool, a flimsier, more fragile version of LittleBigPlanet’s Sackboy and without as many expressions or fancy costumes.

Yarny is created at the start of Unravel, as we watch an elderly woman climb the stairs in her home. She drops a ball of red wool from her knitting basket and, magically, up pops Yarny. Players are then free to navigate Unravel’s central hub, the woman’s home, stumbling across photographs from various experiences in her life — a garden, a trip to the seaside, a scrapyard. These form the backbone of each of Unravel’s gorgeous worlds. 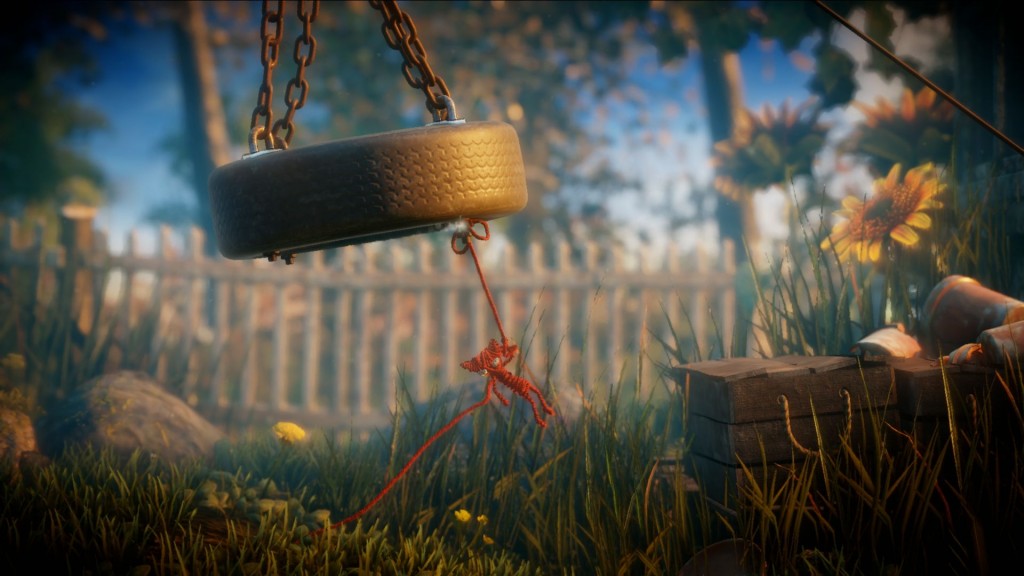 That first experience, the woman’s garden, is also the tutorial level, where you’ll learn Yarny’s rather impressive abilities. At its core, Unravel is a platformer, but it’s one rich with clever, brain-tickling physics puzzles that will require more than a passive engagement. Yarny can jump, throw pieces of himself to lasso objects, push and pull objects around, and rope swing (yarn swing?) across gaps. As players advance through levels, however, Yarny will gradually unravel, leaving a trail of wool behind him. Go back and Yarny will wrap himself back up, but keep going and he’ll reduce to a thin, hobbling, incredibly frail imitation of his former glory. Unless you can find another bundle of wool to add to his frame, you’ll have to walk backwards and find another route.

That’s one of Unravel’s greatest strengths, forcing players to rethink the way they approach the game’s environments. Economy is key — making as few jumps, finding the straightest lines, only forming rope bridges when necessary — to ensure Yarny doesn’t find himself spent before he’s successfully navigated an area. It’s somewhat unfortunate that Unravel doesn’t make greater use of this mechanic — it’s deployed sparingly and effectively, but it would have added an even greater challenge had developer Coldwood Interactive gone for a slightly higher difficulty.

Not that Yarny isn’t going to face troubles. Unravel isn’t afraid to make players think. Many of its puzzles can be boiled down to “push object here, jump there,” or “lasso here, swing there,” but some will require a little more consideration. Unravel keeps tight focus on Yarny, exaggerating how small he feels in his environments, but occasionally the camera will pull back and force players to really analyze an area, before picking their path carefully. It’s a degree of puzzling that was initially unexpected: One of the first puzzles involves pushing apples into a small pond and hopping across them. Cue ten minutes of drowning Yarny over and over again before realizing the game expected me to walk back and use every apple to make a bobbing bridge. Sorry, Yarny. You’ll eventually dry out. 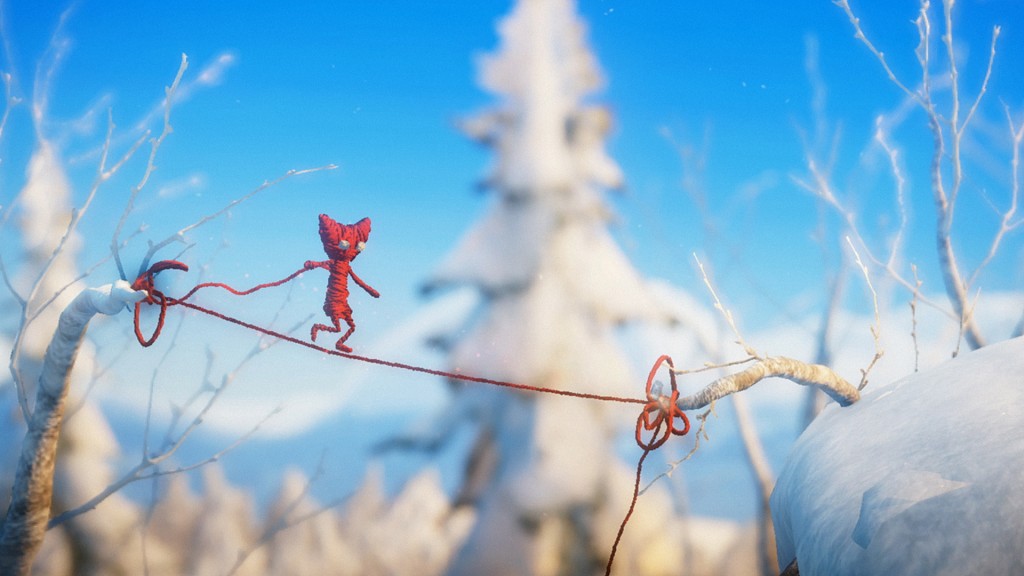 If there’s one area Unravel definitely falls flat, it’s in its core gameplay: platforming. Another element unfortunately borrowed from LittleBigPlanet is that series’ floaty, imprecise controls. Yarny’s movements across the game’s six hour runtime can never be accurately determined — something surprising, given the focus on physics in many of the puzzles. He’s too floaty, too light, too uncertain in his path for players to confidently place him. Normally this isn’t an issue, as levels are negotiated at a fairly relaxed pace, but particularly in later stages Unravel seems to be actively trying to murder Yarny and force the player to quit. Demanding precise inputs without a control scheme to match is a pretty toxic combination for player engagement, and I found myself stepping away from Unravel during one of the darker, more menacing levels, before returning later to try again.

Something sure to keep players going, however, is Unravel’s simple, effective story. As you move through the memories of the elderly woman’s life, Unravel will silently unwind a story about family, love, and the deterioration of both as time advances. In each level you work through, players will see glimpses of the woman’s past — but they’re fuzzy. Yarny collects these memories and returns them to a book in the woman’s home, filling it with quotes and photographs, returning the memories for her to enjoy. It’s a simple, wonderfully told narrative — despite a lack of any spoken dialogue.

It’s backed by an attention to detail and craftsmanship that belies Coldwood’s status as a small developer (though they have EA, one of the biggest publishers out there, as backers). Unravel is a game that never fails to be anything less than spectacularly pretty. Its environments, be they rich grass, weather-beaten rocks, or menacing pools of glowing waste, are rich tapestries for the player to move through. Backgrounds are dense with activity, lighting and animations are top notch, and Yarny himself is wonderfully detailed — red fuzz and all. 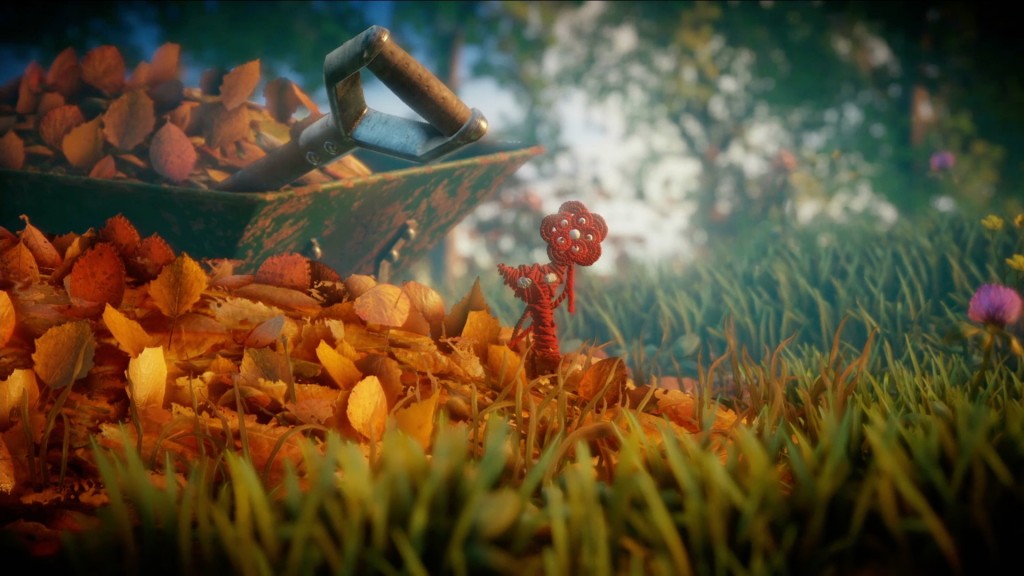 The soundtrack, too, is worthy of mention. Frida Johansson and Henrik Oja’s score is dynamic and changes between the game’s various environments to match the mood, setting and current danger Yarny is in. It can get repetitive if you take too long on puzzle, and you’ll hear where the tracks switch or loop, but it’s a wonderful mix of guitar, strings and very gentle electronica.

Unfortunately, I felt I was missing something in Unravel. Perhaps it was the game’s desire that I invest so heavily in its protagonist and narrative, perhaps it was the undercooked platforming, perhaps it was the fact that the game has difficulty spikes sure to annoy more than a few players. I finished its story and was moved by it, but there wasn’t any lasting impact. It’s so eager to be dramatic and emotional, Coldwood is so keen to be loved and appreciated for its work, that I couldn’t help but detach a little. Journey reaped emotional investment by slowly building a relationship and then snatching it away. Firewatch used incredible dialogue to pack its emotional punch. Unravel offers a cute protagonist and a story about love and expects the emotions to follow, but they don’t — at least, not for me.

That doesn’t dissuade from what is still, in essence, a great experience. Unravel should be commended for trying to be different, even though cute platformers with physics puzzles aren’t that hard to find. What it does represent, though, is a labor of love on the part of its developers. What they’ve produced is undoubtedly beautiful, challenging, and worthy of your time.

Unravel is available now on PC, PS4 and Xbox One.