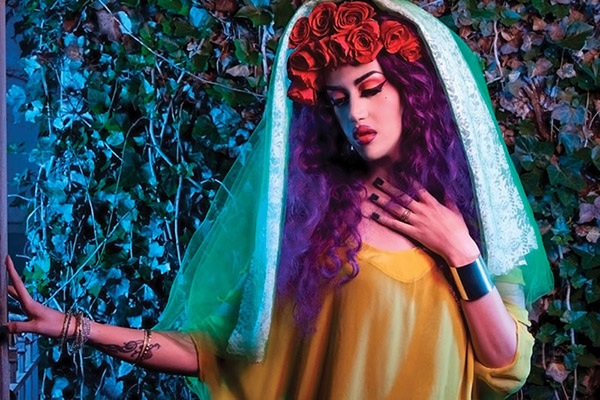 ) is a twistedly tuneful pageant of club bangers and danceable downers. Putting the clichéd, comedy-based music of her peers in the shade, the former RuPaul’s Drag Race contestant weds together funky house music with an appetite for after-hours introspection.

Perhaps fittingly, the album opens with something of a comedown. The world-weary “I.C.U” is a downbeat highlight and a credible showcase for Adore’s adept, if not quite seamless, relish for rapping. A brooding, trip-hop inspired track that thankfully makes no pretense of its performer being a hard-core rapper. However, her best flows are on more carefree, pop-orientated numbers such as “Dynamite.” Blending together crisp electronic pulses with amusing drag queen attitude, it’s a slow-burning gem, proving there is more to Delano than meets both the eye and ear.

The eurodance thump of “Better Than the Movies” might follow a familiar script, but Delano sings with a soft and gristly conviction unimaginable from any other Drag Race contestant. Her producer comes back at her, resonance for resonance, with a wide-eyed sheen that turns it into a blockbuster.

Not backwards in coming forwards, “Foreign Lover” f-bombs its way into someone’s pants (“I know you want to fuck me on the table backstage” probably sounds the same in any language anyway). Just like the encounter being initiated, this is a three-minute head(board) banger that is fun while it lasts, but a long way off conjuring much emotion. “Bold as Love” is a broody slice of heavy-duty club beats, applied more thickly than Delano’s eyeliner. Her token lyrical themes — excess and longing — come out to play once again. If this song was not deliberately written to sound like “bold ass love,” it’s a crime.

The free-for-all eponymous track is the album’s sharpest incision, establishing a bold and brash sound that’s powered by an androgynous groove — and presumably alcohol. Lots of alcohol. Who needs a dress code, when “It’s my party and I’ll fuck who I want” seems to rule out having a guest list? Drunk on seedy, glitter-ball beats, the flirty attitude tingles through every lyrical inch of “After Party,” as Delano saves her subtlety for the sleek song craft. If one were to sarcastically remark that there just aren’t enough acts who dig through ’80s pop for inspiration, Delano’s Forever 21 attitude works its kinetic magic enough to separate her from the crowd. Perky glitter-bomb “Take Me There,” for instance, takes its bubbly, lip-smacking cue from early “Borderline”-era Madonna — via the plastic sheen of Katy Perry’s “Teenage Dream.”

After Party seems like a big, garish make-up box of neon surfaces, but continue listening and you’ll find guts and a softer centre.

However, that latter source of inspiration is the downfall of strummy, sunny “I Really Like It.” Some of the melody sounds suspiciously lifted directly from Katy Perry’s song, and in more blatant fashion than some of Delano’s expletive-driven lyrics elsewhere.

While After Party seems initially like a big, garish make-up box of neon surfaces, continue listening and you’ll find guts and a softer centre. Delano’s vocal gloss hits a nerve on the tragically wounded torch moment “I Can’t Love You”. She deserves to see a sea of mobile phones held up at her as she sings her heart out to this in gay bars all over the world.

The heart-rendering speed-ballad “Constellations” could well be one of the loveliest love letters to the ’80s dance scene ever produced. Slotted in after the dancefloor wreckage occupying the majority of the album, Delano’s sweetly restrained aching shows no sign of losing steam, regardless of slower tempo. Staying faithful to the album’s party-cycle concept, the closing “4am” is the album’s biggest wake-up call, its sombre air catching a moment wherein its singer sings with soft regret. It is doubly disorientating, lingering long after the song has ended.

High on ’80s influences, historical heartache and contemporary excess, After Party is high class pop trash. Every song generates its own uniquely scintillating, gutter-glam glitz. Shadowing the club thumpers are ballads that dig deeper than simply being morning-after moralizers. Indulging in despair at every turn, it’s an album that both explores and intensely commits itself to escape from it. At its best, After Party is swaggering, alcohol-swigging, sexually-swinging and absolutely irresistible.

After Party is available now from Amazon and on streaming services.

After Party by Adore Delano

← Previous Story Gwen Stefani: This is What the Truth Feels Like (review)
Next Story → The wonderful Lynda Carter returns tonight to the Kennedy Center