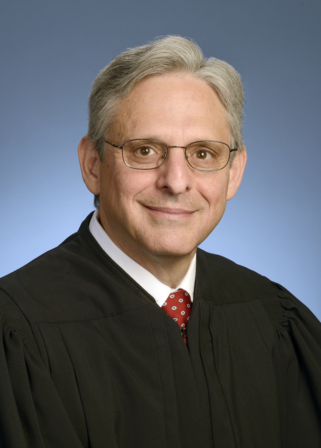 Merrick Garland (Photo: U.S. Court of Appeals for the District of Columbia).

Scalia, a Reagan appointee who died last month while on a hunting expedition in Texas, was a reliable conservative vote on the nation’s highest court. Because of that, as well as general partisan rancor, Senate Republicans have vowed to not even hold hearings on a potential Obama Supreme Court nominee. Instead, they insist that the next president — preferably a Republican, in order to keep the ideological balance of the court favorable to conservatives — should name Scalia’s replacement.

The 63-year-old Garland’s name was floated in recent days as one of three final contenders on a short list along with fellow U.S. Court of Appeals Judge for the District of Columbia Sri Srinivasan and Judge Paul Watford, from the 9th U.S. Circuit Court of Appeals in San Francisco.

Garland’s biggest appeal is that he is known as a moderate and someone who has sought consensus with conservative colleagues. The political calculus is that by nominating someone like Garland, who is more difficult to oppose on ideological grounds, Obama will place pressure on Senate Republicans to at least hold hearings. A thorough vetting of Garland, who has been praised in the past by both U.S. Sen. Orrin Hatch (R-Utah), a member of the Senate Judiciary Committee, and Chief Justice John Roberts, would then place Republican senators, particularly those up for re-election in 2016 in Democratic-leaning or swing states, on the defensive for not agreeing to an up-or-down vote on an Obama nominee.

The vacancy on the court could have a huge impact on litigation that comes before the high court: if the four Republican-appointed judges and the four Democratic-appointed judges on the court split in a 4-4 decision, the Supreme Court will simply only be able to affirm the ruling of the lower court, and cannot create any binding precedent on a certain issue.