Home / Arts + Entertainment / Stage / “All the Way” at Arena Stage, “The Nether” at Woolly Mammoth (reviews)

“All the Way” at Arena Stage, “The Nether” at Woolly Mammoth (reviews)

All The Way has hints of the after-school special, while The Nether is a timely, edgy examination of virtual reality

Those sentient in the early 1970s will likely remember ABC’s “after school specials,” a series of late-afternoon mini-movies for teens that dealt with the socially relevant topics of the day. They were tame, always carried a positive moral spin, and never had any language stronger than “Oh, Man!” Put simply, they were the kind of fare your average high school teacher would approve of.

Well, if you can imagine an after school special for grownups, one a well-lubricated educator might appreciate after a hard day teaching civics to a bunch of gum-chewing students, then you’ll have the vibe of Robert Schenkkan’s All the Way (

It is essentially a soup-to-nuts treatment of the year in which Lyndon Baines Johnson became president upon John F. Kennedy’s assassination — and then campaigned for, if not re-election, election on his own merits. The meat of the drama revolves around LBJ’s machinations to get Civil Rights legislation passed, in order to pull votes from the African-American community and white liberals.

Like anything in politics, it’s a complex issue. And because Schenkkan is — to put it mildly — eager to make sure that numerous notable politicians of the day make an appearance and offer comment on the proceedings, there is a lot of expository from the ensemble. It may set the stage for all the opposing factions, describe the political and social mores of the day, and move the drama, but it does bring on that mood of the after-school special.

Despite this slightly educational tone, Schenkkan’s real goal is delivering LBJ, the man. And that he does. Thrashing his way through the parade of notables is a living, breathing, swearing ball-buster, who terrifies and charms in equal measures — often at the same time. It’s an interesting contrast with the surrounding panoply of thinner characters — and one that actually works — even if one can’t help but wish that Schenkkan had opted to pump more nuance into fewer characters.

Pulling off this duality can’t be easy. Director Kyle Donnelly uses bold pacing and tight rhythm to move the freight, but all must be driven by LBJ. Too over-the-top and he will be nothing but caricature, too underplayed and he will clash with the revolving cast of potted personalities.

Suffice to say, Jack Willis gets it exactly right. He is indomitable, larger-than-life, and incredibly funny. But it is not just writ large, it is also a performance brimming with fascinating nuance. Willis digs into this man and finds his inner fire and deepest secrets. His achievement in carrying the piece cannot be underestimated: without his extraordinary portrayal of the man at the center of this maelstrom, this play would have far too many moving parts.

Unfortunately, there isn’t much scope for many of the other players to develop their (multiple) characters. Cameron Folmar gives his George Wallace some convincing swagger and Bowman Wright’s Martin Luther King, Jr., is played with an effectively intense realism. As Lady Bird Johnson, Susan Rome has a certain self-consciousness — rather like Lady Bird playing herself — but she makes a convincing and memorable connection with her husband. Shannon Dorsey as Coretta Scott King and others, brings compelling clarity to all her roles. Although Schenkkan can’t resist the current toe-curling trend to show women in history as all having been behind-the-scenes power brokers, thankfully the play is just too busy with events to push the issue.

Thus, this play is almost as complex as the subject matter it takes on, but Willis makes it all worthwhile. And Schenkkan does provide one lesson on which every civic and history teacher can agree: this country’s politics are, and have always been, far more convoluted than today’s soundbites would have us believe.

) and it’s not the moral ambiguities of the political world, but rather the virtual. In this not-so-distant future, an investigation is underway of some terrible crimes. The detective in charge has pulled in her prime suspect, a mysterious man she calls Sims, aka Papa. In this new age, the Internet has evolved into the Nether, a fully-immersive sensory experience, and Papa runs a “realm” called The Hideaway. Much like a chat room, people frequent The Hideaway as avatars. Papa appears as himself in his realm, serving, quite literally, as host and moderator.

Quite amazingly, Haley never lets her characters or suggestions becoming preachy or moralizing. Even more extraordinary is her skill in handling the hypotheticals. Although it couldn’t be edgier, she engages with such fine restraint and clear vision, it succeeds in capturing the issues and questions at their most vital juncture. This is huge, skillful and incredibly rare. Some will find it hard to endure, but Haley is a playwright to trust.

Check for Discount Tickets to The Nether

There is, by necessity, a certain artifice here and the challenge for the players is to deliver enough realism to compel and connect. Gabriela Fernandez-Coffey as Detective Morris does a superb job of driving the imperative and offering a quietly convincing introspection. As Sims/Papa, Edward Gero is appropriately commanding and ambiguous, though he at times feels a tad too actorly in the interrogation room. In the role of witness Doyle, Paul Vincent O’Connor is fascinating and nuanced. Maya Brettell is hauntingly memorable as Iris and Tim Getman is believable in his awkward avatar Woodnut.

The timing of The Nether couldn’t be better. The Internet — with its morally unbounded landscape — is already deeply embedded in our lives and psyches. This play raises questions that will only become of greater importance. 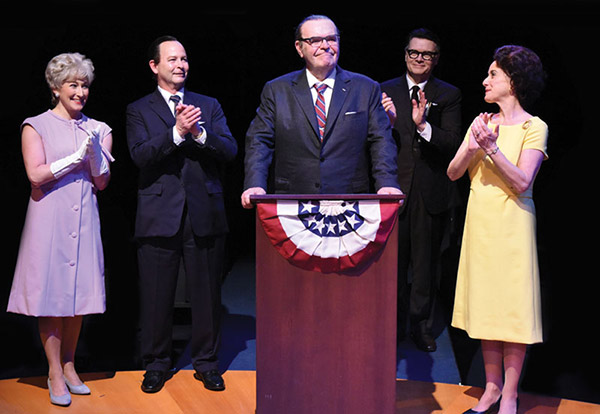