) is a vaudevillian mashup of the Bard’s greatest hits and one-liners. Think one part The Carol Burnett Show, one part children’s theater, and a dash of The Three Stooges (circa Joe), and you’ve got the idea.

The hook here is a pretend first-ever play of the Bard’s in which everyone from Hamlet to Puck appear in a jumble of a plot that — as will be obvious — draws from many of his later classics. The result of course is contained chaos. The fun for Shakespeare fans is in following the references of coauthors and actors Reed Martin and Austin Tichenor, as they graft together myriad plots, people and well-known lines into their own madcap play. With the two of them, and third man Teddy Spencer, playing all the characters in a whirlwind of cheesy props, it’s fast and furious entertainment.

Will you find it clever and funny? Well, that’s a matter of sensibilities. Suffice to say that if you carry a tote with a pithy saying on it and believe your cat knows what you are thinking, then this is likely right up your alley. If you are of a cynical bent and prefer your humor in the form of an acerbic bloodletting, you will find this heavier going.

But take it for what it is — broad entertainment for a narrow audience — and it will likely please more people than it bores. Tichenor sets the tone, writing it big and bold, thoroughly enjoying himself and at the same time suggesting everyone is in on the joke. As for Martin, although he may not have the prettiest voice for Shakespeare, he certainly has the fluidity. More importantly for this accessible adventure, he manages to suggest a guy who was grilling hamburgers a minute ago before deciding to join the dramatic fray. Rounding out the trio, Spencer savors his campier moments and occasionally offers a glimpse of the kind of gravitas he no doubt brings to his “real” Shakespeare. But whatever the nuances, these three are richly in synch and revel equally in the speed, antics and word play of the show. Just as importantly, they play to the audience, inviting everyone to bask in the atmosphere of grownups having fun.

Still, in the tradition of educated parody, this is pretty mild stuff and it makes for a rather blunt, family-friendly, object (and a few gay references are, in this day and age and metropolitan area, family-friendly). Unless they start putting on a better midnight show, this is strictly for “She Who Must Be Obeyed.” 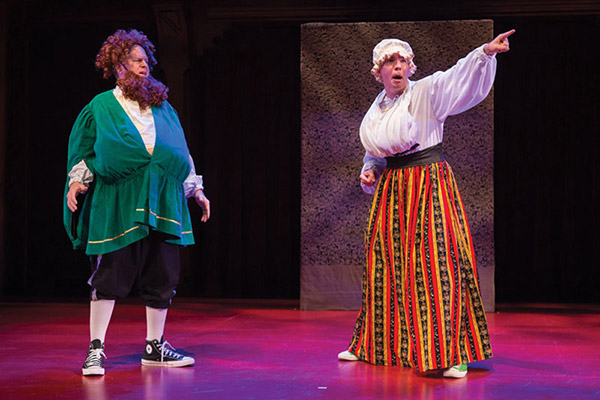